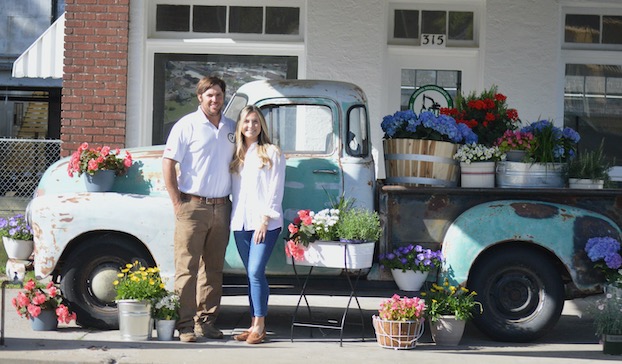 While not a tow truck, the vehicle might remind some people of ‘Mater from the animated movie “Cars” or Fred Sanford’s truck from the 1970’s television show.

No matter how you slice it, the truck has become a photo stop on the way into downtown. Saunders and Polk brought it in and decorated it for the 2021 holiday season, then left it for winter.

As spring arrived, Polk, a Washington native, decided to gussy up the antique vehicle a bit for the season of renewal and it turned into quite the photo opportunity, particularly over Easter weekend.

“We wanted to add something cheerful and uplifting to this side of town,” Polk said of the location across Main St. from the Grace Martin Harwell Senior Center and the Washington Waterfront Underground Railroad Museum.

“My great-grandfather, Ed Cherry, worked at the Main Street Station back in the 1940’s, pumping gas, changing oil and cleaning windshields, so it’s a great way to honor his memory and it’s a place for people to stop and get their picture taken.”

Saunders grew up on a farm in Washington County outside Plymouth and helped his neighbors, Dean and Amy Gurganus, by doing chores on their farm to earn spending money. He ended up spending some on the truck before he was old enough to drive it.

“I was probably 13 when I bought it from them,” the now 32-year old said. “I noticed it under a barn one of the first times I was at their place and always thought it was really cool. I like old trucks and tractors and this one is unique.”

The old gas station went on the market three years ago and the couple bought it without knowing what it would eventually become. It’s still a work in progress, but Polk, a local Realtor and Saunders, a general contractor, are going to make it useful somehow.

“We’ve already done a lot of work to make it structurally safe,” Polk said. The place was a mess when we got it and there was a hole from the roof through the floor into the basement. We know we will preserve it somehow, but we haven’t decided on a specific use just yet.”

In the meantime, what started out as a joke has turned into a hit.

“I remember riding around Washington with my great-grandpa and hearing stories about him working here and what used to be in other spots around town,” Polk said. “We’re surprised, but really happy, that the old truck has gotten so much attention. Good things are happening downtown and we hope this gives folks another reason to come check it out.”