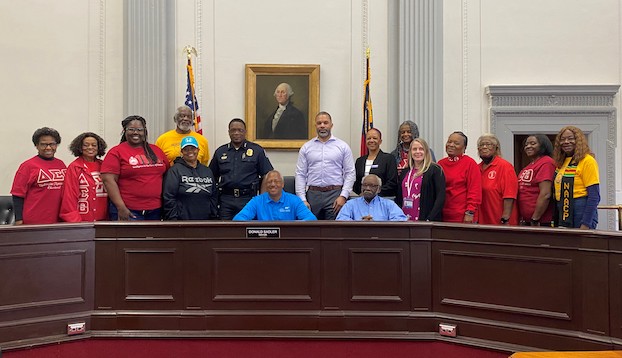 Washington leaders representing city government and several advocacy groups are putting an exclamation mark at the end of April, which is Sexual Awareness Month, by encouraging town-wide participation in Denim Day, an international protest held since 1999 to support victims of sexual violence.

That support started at the top this week, when Washington Mayor Donald Sadler signed a proclamation encouraging Washington residents to “stand in solidarity with survivors of sexual violence, and speak up when they hear comments that blame victims or make light of sexual harassment and assault.” That signing was attended by members of the Washington/Beaufort County Human Relations Council (HRC). The group has since sent an email to town leaders throughout Beaufort County, encouraging their staff members to “wear denim on Wednesday, April 27… to show support for victims and survivors of sexual harassment, abuse, assault, rape, and to promote discussion of the misconceptions that surround sexual violence.”

Why denim? The silent visual protest has its roots in a 1999 court decision that reversed the rape conviction of a 45-year-old driving instructor who said the act was consensual. He claimed that, because the 18-year-old student was wearing jeans that were so tight that she allegedly had to help him remove them, she was a consenting adult rather than a rape victim. The court sided with the rapist. Women who heard about the decision became so enraged that many – including government officials – protested by wearing jeans on the steps of the Supreme Court of Italy, where the rape had occurred. The protest was covered by the media and spread worldwide, inspiring like-minded people in Los Angeles to hold a similar event that same year, followed by annual observances nationwide ever since.

The purpose of Denim Day is to raise awareness about all forms of sexual violence. “Throughout the country and world, the day sets a standard of support for survivors and provides a foundation for solidarity through a simple message: there is no reason for sexual assault – not even the type of clothes a person wears,” according to the HRC letter sent to Beaufort County town leaders.

Statistics about sexual assault were shared with those in attendance at the proclamation signing. According to current figures: someone in America is sexually assaulted every two minutes. One in five women and one out of every 33 min are raped during their lifetimes. Youth under 18 years old account for approximately 44% of all reported sexual assaults and rapes. Nationwide, 81% of women and 43% of men have reported experiencing some form of sexual harassment and/or assault in their lifetimes, and about 75% of harassment victims experience retaliation when they report it.

When he signed the proclamation on Tuesday, Mayor Sadler encouraged those in attendance to “change how we think and talk about the issue… together we can create a culture of respect, equality, and safety for our citizens.”