Harlan Taylor MacKendric: A life of gifts to those around him 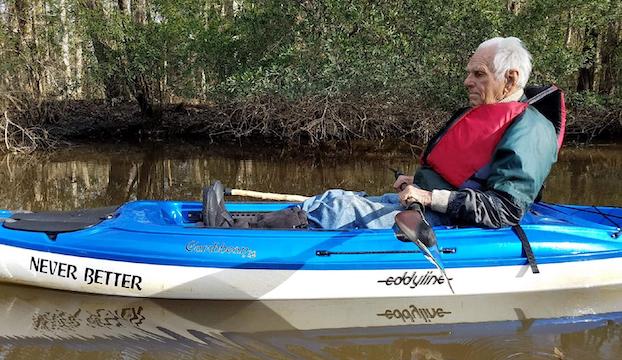 Harlan Taylor MacKendrick was 17 years old when he saw the Hindenburg fly over his hometown on its way to New Jersey, where the fabled German air ship caught fire mid-air and was destroyed in 1937. He got his draft notice the day after Pearl Harbor was bombed in 1941. His daughter Linda Brown said, this week, that MacKendrick taught his three children about life by living it well, often on one of the many boats he owned over the years. She said the memories created over the years have shaped their personalities, helped them weather the storms of life and stay grateful for its blessings – even in the midst of pain. Local residents who learned of his death last week, at 102 years old, said his matchless intensity and love of life taught them similar lessons over the several decades he lived in Washington.

“He was more like a man in his 50’s on the day I met him,” said Gary Pitsenberger, a friend of more than 20 years who shared MacKendrick’s love of sailing and painting. “One of my earliest memories of him was watching him come up from the water, behind his sailboat, where he had been scraping barnacles off the propeller. He was in his mid-80’s then! I gave him a painting of both our boats for his 100th birthday. It had been five or six years since he sold it. His reaction was like a spiritual hug,” said Pitsenberger, who, with MacKendrick, has been part of the creative arts groups at the Grace Martin Harwell Senior Center for many years, where several of the centenarian’s paintings line the walls.

“He was amazing,” said Stephanie Williams, also a member of the senior center arts group. “No matter what health challenge he was going through, this old man would crack a conspiratorial smile, look at you, and say “never better… nothing was too difficult for him to try.”

Those adventures included kayaking, which he decided to do after his 95th birthday. He and daughter Linda became local celebrities at IBX Outfitters, where both had bought kayaks and would hit the water “every good Saturday, even through the winter, and probably go out at least 40 times or more each year. Then we’d go for lunch, alternating who would pay.” He added tricycle riding at 100, and shared a river cruise with his daughter to celebrate his 101st birthday.

He became such a celebrated member of the Washington kayaking community that a memorial tribute for MacKendrick and his late wife Edith has been planned for 2 p.m. on May 15th at the Havens Garden boat ramp, where he was chosen to be the first person to push off into the water on the day it was dedicated. Another celebration of life service, this one a bit more traditional, has been scheduled for 2 p.m. Sunday (April 24) at First Christian Church.

“To understand Harlan is to realize that when others had given up on life and adventure, he kept going,” his daughter said. “He loved reading, painting watercolors… taking his dog Margie to the dog park and talking with other pet owners. My mom got used to waiting hours for him to return from what he said was going to be a quick errand, because he would talk to everyone.”

But his retirement life wasn’t simply about enjoying the results of his work years. “When he retired, he felt that it was his job to do what the working people couldn’t do”, his daughter said, “so he became part of the town’s Interchurch Forum and helped build the walls of Zion Homeless Shelter, where he was on the board till just a few years ago.” He also organized a sunrise Easter sunrise service that has run for more than 20 years, and served with Christians in Action – a service group known as “CIA” – at First Christian Church.

Even in his last days, as a combination of age and increasing medical challenges quickly descended, MacKendrick maintained an attitude that his friend and caregiver Monica Amende said was nothing short of saintly – but always with a touch of humor. “He was so charming with the nurses. He was a social warrior. Even after his foot had to be amputated, when we asked him how he was doing he would always look over and say ‘never better’ – that was his motto for life.”