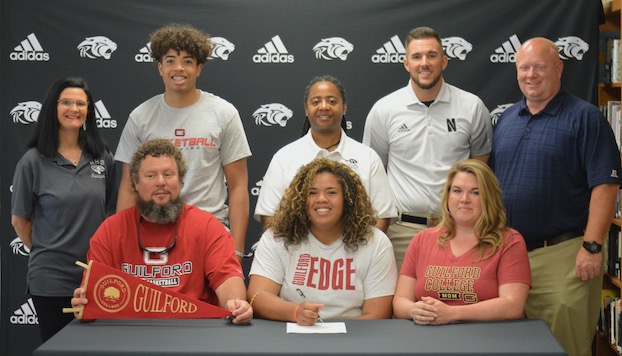 Northside’s Shyanne Buck will continue her basketball career at Guilford College in Greensboro.

Buck, a 6’3 post player, accepted a full scholarship after helping the Panthers to an 18-3 record and a trip to the fourth round of the 1A state playoffs after transferring from Unity Christian in Chocowinity.

“I miss my friends there, but coming here was the best option for my future and it paid off,” Buck said. “Coach Leathers pushed me hard to reach my potential and I improved playing against better competition. I enjoyed finishing fourth in the State Games in Raleigh last summer and beating 3A and 4A teams even though we are a small school.”

Buck averaged 13 points and seven rebounds a game on a balanced Panthers squad that had several scoring options. She was a formidable presence in the lane and opponents were wary of challenging her in the paint.

“She’s the first player I’ve had here to get the chance to play in college, so I’m really excited for her,” coach Michelle Leathers, who started in 2009, said. “We needed a true center because we were guard-oriented and she stepped right in to play strong inside. She was aggressive and a good leader for us. She sacrificed some of her individual game to make us a better team and we had a successful year because of it.”

The Quaker are a division III institution who compete in the Old Dominion Athletic Conference under Matthews, who finished 8-17 in her first season. “Guilford is far enough away, yet close enough for me to come home and for my family to see me play. The coach (Sarah Matthews) and I clicked during my visit and I like the fact that they have athletic dorms so I will get to know my teammates quicker.”

Buck had interest from Lenoir-Rhyne in Hickory and Lee-McRae in Banner Elk along with feelers from ECU and UNC-Asheville. She has seven horses and a mule at her home north of Washington and plans to become a veterinarian.

“Their pre-vet program was a big attraction for me,” she said. “I’ve always loved animals and Guilford is the best academic and basketball option. They only had nine players last season, so I think there’s an opportunity for playing time next year. I’m going to continue to train all summer so I can complete for playing time when I get there.”