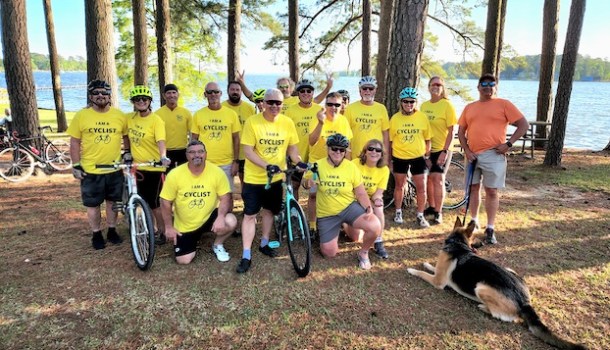 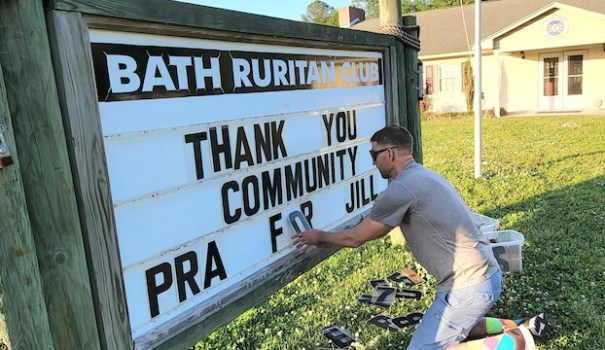 GRATITUDE DISPLAYED Ruritan member and cycling enthusiast Jeff Staton “edits” the sign, in front of the Bath Ruritan Club, which advertised and now thanks supporters of the shrimp dinner benefit event that sold out in less than two hours. (Karen Thiel/for the Daily News)

Passion and purpose united this week, as friends, family, and fellow bicycling enthusiasts teamed up to support Jill Paxton, the Beaufort County resident who is recovering from injuries related to the accident, two weeks ago, during which she was struck by a truck while riding her bicycle. Their f efforts have raised several thousand dollars, meant to help pay for the treatment she will need once discharged from the hospital, where Paxton has been for just over two weeks.

“The cycling community that knows Jill is devastated,” said Belhaven resident Lisa Backer, who joined a group of 16 members of the riding group that participated. Paxton, who is employed at the Department of Environmental and Natural Resources in Washington, is a long time member of the riding group that meets at IBX Outfitters. “She is my assigned lieutenant and closest cycling friend. Getting to the scene of that crash was the longest two-mile ride I have ever done,” said Liane Harsh, who owns the business.

Harsh said that Paxton is currently being treated for injuries including two broken legs, 17 broken ribs, broken jaw and sternum, damage to her teeth and jaw, as well as several broken bones in her hands. She is still intubated because of breathing issues caused by the sternum fractures. “Now it’s all about getting her off that respirator,” Harsh said.

In the meantime, hundreds of community members throughout Beaufort County have rallied on Paxton’s behalf. The most recent effort took place this past Monday, sponsored by the Bath Ruritan Club and spearheaded by member Jeff Staton, who has participated with the IBX Outfitters riding group for about last 12 years. “We do six or seven fundraisers every year and most of them are for beneficiaries, not our operating expenses,” he said after the sold-out event on Monday afternoon, adding that the idea to dedicate this week’s dinner to Paxton was instantly approved by Ruritan members.

Members of the riding group expressed frustration about the safety issue experienced by may cyclists, including the drivers of cars, trucks, and other vehicles who veer too close to them. State law mandates that cyclists – including pairs riding tandem – be given four feet of road space between them and any vehicle that passes as they are riding.  Harsh noted that, even with bright yellow T-shirts worn by every member of the group this week, they were “buzzed” by several cars, including a blue Camaro that shadowed them all during their “solidarity” journey from The River Church to the Ruritan location.

Monday’s fundraiser came up with several thousand dollars, all earmarked for Paxton’s future care once discharged from the hospital. “Insurance money runs out really quickly, and she deserves all the assistance she can get from us. Jill is just a great person. She’s fun to be around, would do anything for anybody and gets the job done with us at work, too” said Ruritan member Robert Tankard, an assistant water quality supervisor who works with Paxton.

“This will hopefully put a face on the bicyclists in our area. Please treat a bike like you would treat farm equipment on the road. Pass when it is safe to pass — even for cycling pairs, which are legal — and with a four-foot space between you and them,” Harsh said, while being interrupted by several people who steadily arrived at her store specifically to offer donations and find out about “Climb the Hill with Jill”, which is the GoFundMe site where contributions are currently being accepted. “I want it to register that this could be your dentist you’re buzzing, your financial advisor,” she said, “or a relative of yours.”