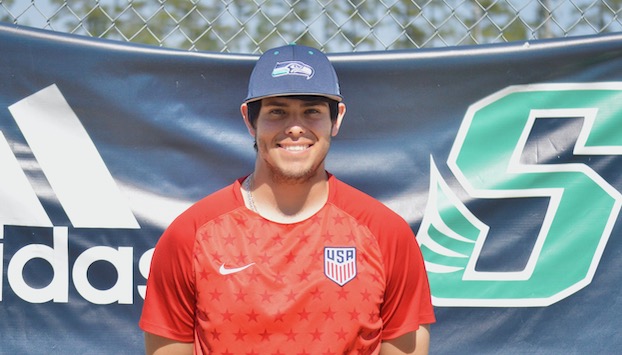 The Southside baseball Seahawks are on the playoff bubble with four games left and senior Bryan Gutierrez has been a big part of their success. The center fielder is hitting .400 with 11 extra base hits and nine stolen bases.

Bryan: No Southside baseball team has ever made the playoffs and it would mean a lot to all of us to be the first. We would leave something behind for future teams to strive for. We almost made it last year, but didn’t finish the season the way we were capable of. We are a better overall team this year and I think we can do it.

Bryan: I had a terrible year at the plate last year and I’m hitting the ball much better this season. I struck out a lot last year and really let it get to me mentally. I didn’t really adjust my swing, but I adjusted my mindset. I’m more relaxed and loose at the plate now and it’s paying off for me. My teammates and coaches have worked with me on clearing my head and blocking out the pressure so I can be successful at the plate.

Bryan: I grew up in Chocowinity, but started playing in the Washington Youth Baseball League when I was 12. My cousin, who I’m really close to and is the same age, signed up and encouraged me to stay with it. I played at Chocowinity Middle School and all four years here and have had a lot of fun. I’ve always liked the way the crowd gets into it after somebody gets a hit or makes a good play in the field.

Bryan: I like baserunning the best because it’s a little thing that can pay off big. Stealing bases is really fun because you can get in scoring position easier. I watch the pitcher to see how many times he throws over to first on pickoffs and how quickly he delivers to the plate. I also watch the catcher to see how strong his arm is. I have the green light to steal sometimes, but not all the time.

Bryan: I’m going to start out at Beaufort County Community College. I’d like to study electrical engineering and also learn about welding and construction.  I’m not sure what field I want to go into for a career, but I have time to figure it out.