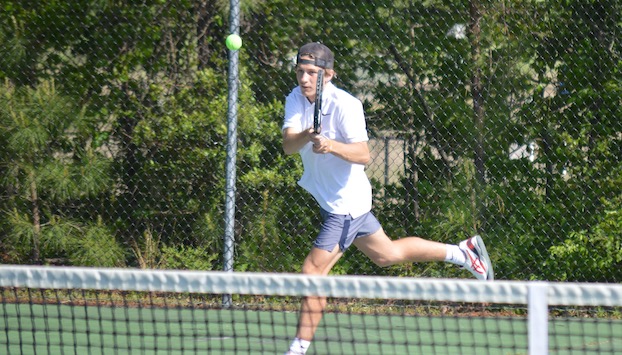 The Washington High School boys tennis team advanced to the second round of the 2A state playoffs with an 8-1 victory over Jordan-Matthews of Siler City on a windy Wednesday afternoon on their home court.

Washington will stay home for the third round with a victory, because second-seeded North Johnston lost, 9-0, to number 15 Franklin Academy in Wednesday’s opening round.

Top-seeded Clinton is the only higher seeded team than Washington left after a 5-1 victory over Greene Central.

Washington won five of the six singles matches and swept doubles against the 14th-seeded Jets.

Senior Hunter Moore needed a tie-breaker in the second set at number two singles. He won, 7-5, after a 6-2 opening set victory.

“His opponent started playing better in the second set and Hunter was down 2-5 in the tie-breaker before he came back,” coach Miranda Whitley said. “He never gives up when he’s behind and stayed focused to win five straight points.”