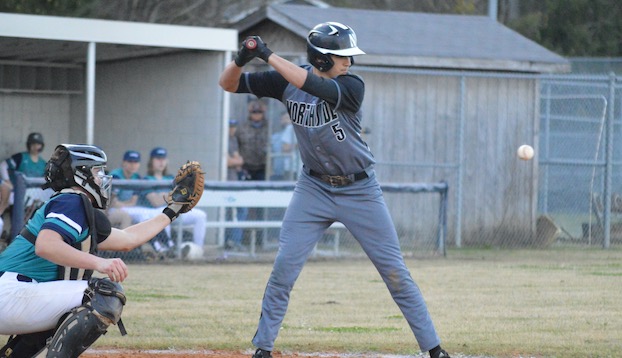 The Northside baseball team wrapped up the Coastal Plains Conference with a 14-2 rout of second place Jones County Friday. The Panthers have league contests remaining against Lejeune and Pamlico County this week, but lead Jones by two games with the tie-breaker in hand.

“It’s been quite a few years since we’ve won a conference title in baseball and I’m really proud of this group,” coach Keith Boyd said. “I know coaches say this a lot, but it’s been a true team effort. We have seven guys in our lineup hitting above .300l and several guys have stepped up to pitch when we’ve needed them. We weren’t sure how our pitching would be going into the season, but it’s turned out very well.”

Senior Mitch Godley leads the offense with a .438 average, while junior Eli Huynh is batting .386 with a team-best 19 RBI.

Senior Keifer Boyd (.351), junior Hunter Chrismon (.348), senior Fortino Beltran (.333), junior Carson Clinkscales (.339) and sophomore Brandon Arthur (.310) are among the nine Panthers who are in double figures in hits and runs scored, while eight have driven in at least 10 runs.

“Being balanced throughout our order has been a huge reason for our success,” Boyd said. “Nobody has to do it by themselves and if a couple are struggling on a given night, there are two or three others who can pick them up. We can run a little bit, (72 stolen bases, with four players in double figures) and our fielding has been a lot better lately.”

Boyd credited Chrismon, Clinkscales and sophomore Shane Biggs with filling in when needed.

“There’s no seniors on our pitching staff and they’ve done very well with very little varsity experience,” Boyd said. “This is a fun group to coach and I’m glad our three seniors can go out with a conference title.”

By virtue of the league title, the Panthers should get a first round home playoff game and have a chance for two if they win out this week. Senior night is Thursday, the brackets will come out Monday and the state tournament will start Tuesday.