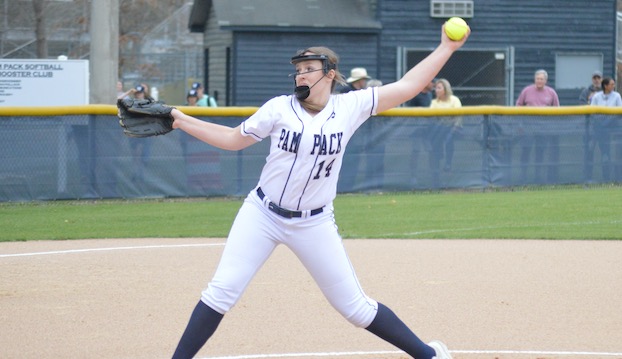 Mission accomplished after the Pam Pack’s 22-0 rout at second-place SouthWest Edgecombe Friday behind freshman pitcher Emma Orr’s second complete game no-hitter this season. She also combined with junior Erin Everett on one earlier in the season.

The Pam Pack are still the top-ranked 2A team in the East, according to MaxPreps.com with a 10-0 conference mark and a 19-0 overall record.

They beat the previously undefeated Cougars, 6-1, at home Tuesday, then left no doubt with the resounding road win Friday.

“It feels great to accomplish one of our goals that we set before the season started,” coach Brad Horton said. “I’m very pleased with the way the girls performed this week. We only had one practice coming off spring break before Tuesday’s game, then had to deal with the distraction of prom night before Friday’s game. They focused on softball and played very well in all phases.”

Washington has swung the bats well all year, hitting .426 as a team with 16 home runs from seven different players. Junior Ava Shae Mizell has five long balls and leads the team with 36 runs scored.

“It’s underheard of to have that many starters hitting that well,” Horton said. “We work on it every day and it’s paid off.”

Orr and junior Erin Everett have allowed 25 runs all year, 15 earned, with 174 strikeouts in 106 innings.

“We knew Erin was going to give us solid innings and we knew Emma was capable,” Horton said. “We didn’t know how soon she would adapt to high school hitters, but obviously it didn’t take very long. She’s big piece of the puzzle for us and having those two both pitching well will really help us in the playoffs.”

WHS plays Ayden-Grifton home and away this week to end the regular season with senior night Friday at 7 p.m.

The playoff pairings come out Monday and the state tournament starts Tuesday.