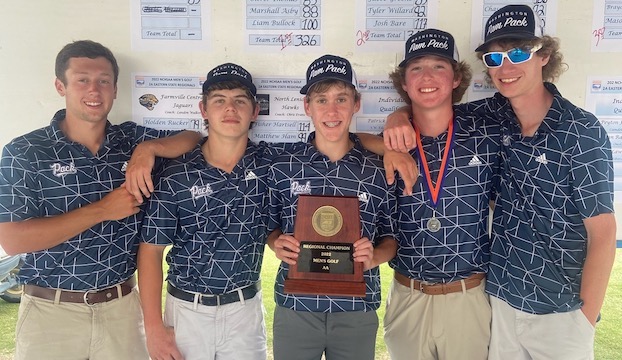 From left: The Washington High School team of Ridge Zerniak, Marshall Asby, Oliver Thomas, Rob Bergevin and Liam Bullock will compete in the 2A state golf tournament at Pinehurst. (Submitted)

Washington High School won Monday’s 2A golf east regional, Northside finished second and Southside was third in the 1A tournament, which means all three will advance to state tournament play next week.

Washington is back in the state tournament after missing last year for the first time in nine seasons under coach Jim Kozuch.

“It’s nice to be back,” he said. “All of our guys started slowly, but put together great shots on the back nine. Ridge (Zerniak) had a fantastic back nine to shoot one of his best scores this season. We picked a great day to score well as a team.”

Junior Rob Bergevin fired a one over par 73 at the Wedgewood Golf Club in Wilson to finished second, two shots behind East Carolina commit, Nate O’Neal of Beddingfield.

Zerniak finished sixth with an 80, while freshman Oliver Thomas shot 85, good for 12th place. Junior Marshall Asby’s 88 was good for 16th place to round out the Pam Pack scoring.

The 2A state tournament is Monday and Tuesday on the Foxfire Red course in Pinehurst.

Junior David Wallace led Northside with a 91, good for sixth place. Sophomore Gus Vansant tied for ninth with a 99, senior Zack bond was 10th at 102 and freshman Clair Holmes was 11th at 108 to complete the Panthers scoring.

“I’m glad this group gets to play another tournament,” Northside coach Jared Adams said. “We’ve improved steadily since the start and competing in the state match will give our young players valuable experience they can use in the future.”

“I don’t think our scores reflected our ability, but we played well enough to make it back to the state meet,” coach David Dixon said. “We’ll have the rest of the week to prepare a trip to Pinehurst.”

The 1A state tournament will be at Longleaf Golf & Family Club in Southern Pines Monday and Tuesday.