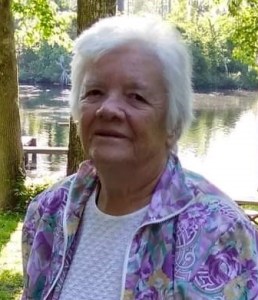 Mrs. Ola Ray Parnell Deal, age 94, a resident of 105 Patricia Road, Washington, died Sunday, May 1, 2022, at her home. She drifted off into a peaceful sleep with her family by her side.

Funeral services will be held 1:00 PM Thursday, May 5, 2022 at Paul Funeral Home & Crematory in Washington, conducted by Jonathan Phillips.  Burial will follow in the Deal Cemetery in Aurora.

Mrs. Deal was born in Forsyth County, N.C. on March 10, 1928. She was the daughter of the late Alvin Vairance Parnell, Sr. and Onie Pennell Parnell. Mrs. Deal attended Aurora schools and later became a homemaker. She was an avid gardener blessed with a green thumb and enjoyed sharing many of her varieties of plants with friends and family. She also enjoyed quilt making and shared over thirty quilts with love ones.  She was a past member of the South Creek Missionary Baptist Church and current member of Dublin Grove FWB Church.

The family will receive friends 12 Noon to 1:00 PM Thursday prior to the service at the funeral home and at her home, 1626 Spring Creek Road, Aurora following the service.

Paul Funeral Home & Crematory in Washington is honored to serve the Deal family.