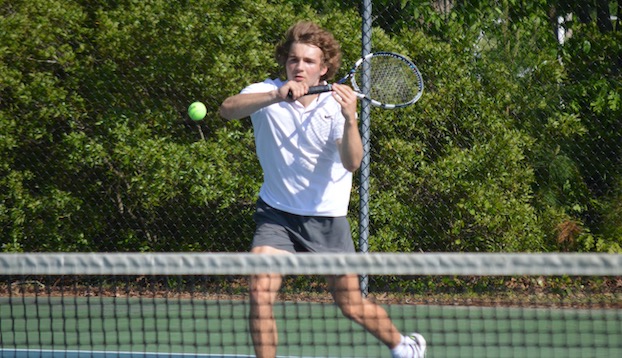 Senior Campbell Curtis was one of three Washington High School players to qualify for the 2A individual state tournament. (Steve Barnes/Washington Daily News)

With the dual team and individual state tennis tournaments going on at the same time, it can be confusing to keep everything straight.

While Washington High School competes in the second round of the team tournament, three players have qualified for the individual event Friday and Saturday at Ting Park in Holly Springs.

After an undefeated regular season and Eastern Plains Conference championship, the Pack sent all six regular players to the east regional in Greenville over the weekend.

Senior Campbell Curtis, the Pack’s top singles player, advanced to the state tournament with a third place finish and the doubles duo of senior Hunter Moore and Will Glover kept going after a runner-up finish to a pair from Goldsboro.

The doubles team of freshman Micah Whitley and senior Jackson Wilder along with junior Keenan Curtis (singles) lost to North Johnston opponents in the second round.

Campbell was seeded fourth and finished third, so he did very well,” coach Miranda Whitley said. “Hunter and Will were the second seed and played a great first set in the finals. They lost in a tie-breaker and ran out of steam in the second set. It will be fun to compete this weekend.”