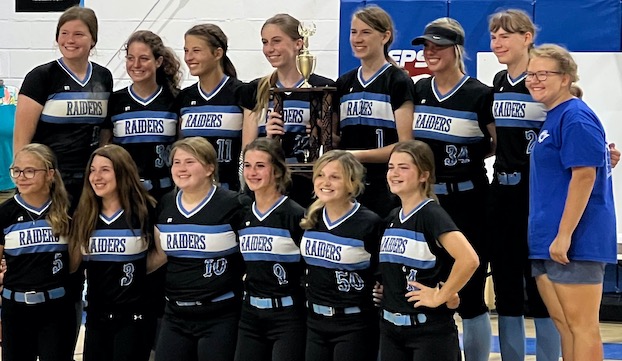 Stoop struck out 15 batters in the first game and six in the second to earn both pitching victories. She was named conference player of the year and the tournament’s most valuable player. Emma Hanna and Melanie Rutledge were named to the All-Conference team and the All-Tournament team along with Ginny Grace Pugh and Ella Kate Hanna.

“It was a true team effort. I’m proud of how hard the girls have worked the whole season,” Leigh Stoop, who was named coach of the year, said.

The Lady Raiders soccer team also claimed the league tournament title in their first year as a program with a 6-0 win over the Albemarle School and a 6-1 victory over Lawrence Academy.

Baxter was named TIC Player of the year while Reagan Walker, Audrey Gibbs, Julia Rouse and Noble were all selected to the TIC All-Conference team.

Raider Coach Logan Van Staalduinen was named TIC Coach of the year as the Lady Raiders finished 11-5 after a 1-4 start.

The baseball Raiders lost to Lawrence, 10-0, in Wednesday’s championship match to finish 12-7. The two shared the regular season title.

PCA advanced with a 15-4 win over Ridgecroft School on Tuesday. Devin Cadle went 2-5 with 3 RBI and Deacon Etheridge added two hits. Bo Spencer picked up the win on the mound, giving up no runs on one hit in two innings. All three were named to the All-Conference and All-Tournament teams.

All three Raider teams will be in action next week in the NCISAA State Playoffs. Soccer and baseball should be seeded in the top eight and receive a first round bye while Softball should be a top two seed.