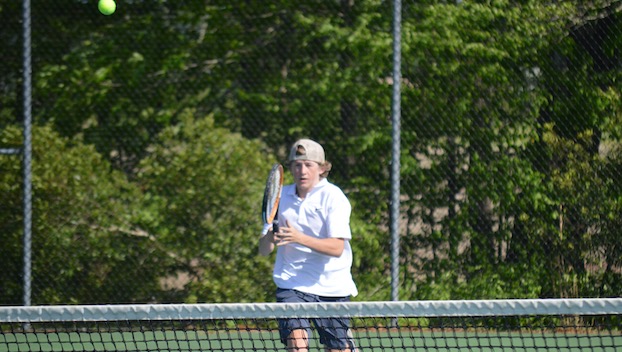 Freshman Will Glover helped the Pam Pack to the third round of the state dual team tennis playoffs and also qualified for the individual state tournament in doubles. (Steve Barnes/Washington Daily News)

Thanks to an unwieldy state playoff seeding system, the 15th seed in the East just might go all the way.

Despite being seeded 15th, Franklin Academy of Wake Forest has rolled through the first three rounds of the state 2A dual team tennis tournament, including a 7-2 decision over third-seeded Washington Monday.

The Pam Pack was the first post-season foe to win a match against the 12-5 Patriots, while taking their first loss this season to finish 16-1.

Franklin swept North Johnston and Nash Central on the road and will face conference foe North Carolina School of Science and Math in the East final.

“They are very good team that plays in the best 2A conference in the east, so that’s why they were seeded so low,” Washington coach Miranda Whitley. “I’m proud that we won two matches and we’ve had a successful season. I will miss our seniors, but we have three of our top six coming back plus a solid group of freshmen this year who didn’t play much. I’m proud of our conference championship and making it this far in the state tournament.”

Over the weekend, senior Campbell Curtis and the doubles team of senior Hunter Moore and freshman Will Glover, competed but didn’t place at the individual state meet in Holly Springs.