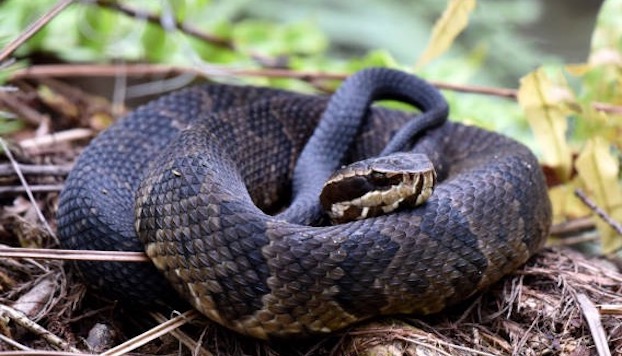 Beaufort County is home to many different kinds of snakes and warmer weather makes them more visible. No cause for alarm, but be vigilant.

More snakes will start to show up along trails, in the woods, crossing roads and in our yards as the weather warms up. After all, snakes like to work on their tan just like we do.

Wildlife diversity biologists at the N.C. Wildlife Resources Commission request that if you see a snake, do not be alarmed, do not kill it, give it plenty of room, and if you see a pine snake or rattlesnake, report it.

“Believe it or not, snakes have a place in the ecosystem and most are afraid of humans,” Goose Creek State Park Ranger Nick Botello said.

“They eat mice (and other rodents), insects and help things stay balanced.”

Botello said the park has six varieties of snakes; pigmy rattlers, copperheads and the water moccasin or cottonmouth of the poisonous species and water snakes, belly snakes and black racers, which pose no threat to humans.

“We see quite a few pigmy rattlers down by the swim beach,” Botello said. “They are about the length of a pencil and are red and gray with black spots. We find copperheads in the woods and the cottonmouth near (or in) the water. Be aware when you are walking and stay on the trail.”

According to the North Carolina Wildlife Commission, 10 of the states 38 native snake species are endangered, threatened or of specific concern.

If you see a snake in your yard and would prefer it to reside elsewhere, you can safely encourage it to leave by gently spraying it with a garden hose. You can also make your yard less hospitable for snakes by cleaning up clutter such as stick and rock piles, keeping your lawn mowed, closing gaps and holes in your siding and foundation, and sealing openings under doors, windows and around waterpipes.

Most snakes will leave people alone if they aren’t bothered and are provided an escape route. Watching for snakes and giving them a wide berth are effective habits for co-existing with snakes safely.

Botello said most snakes will only attack to defend themselves, after being stepped on, for example.

“The best strategy is to avoid them, if possible,” he said. “They usually run away once they’ve noticed you. We’ve noticed fewer snakes in the park so far this year and we’re not sure why. If you do get bitten, call or have someone call 911 quickly. Not every strike has venom in it but you should still have it checked out.”