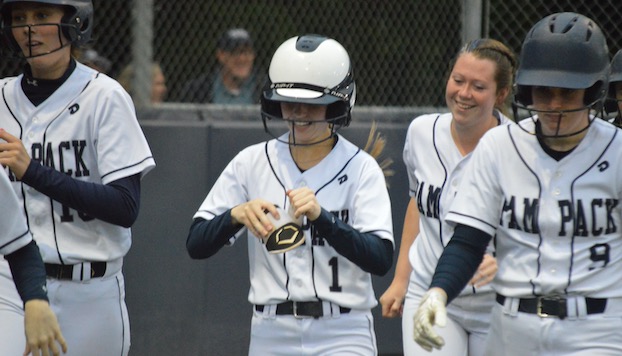 Washington senior Olivia Paszt (1) heads to the dugout after hitting a three run homer in the first round playoff victory over Jordan-Matthews. (Steve Barnes/Washington Daily News)

It took the top-seeded and undefeated Washington High School girls softball team longer than usual to put runs on the board, but the inevitable explosion did happen as the Pam Pack eliminated 32nd-seeded Jordan-Matthews of Siler City, 10-0 in the first round of the 2A state playoffs Tuesday night at home.

Ava Shae Mizell’s sixth home run came with two outs in the third inning and lit the offensive spark, then the Pack erupted for six runs in the fifth, three on senior Olivia Paszt home run to right field.

Paszt ended the game with an RBI single in the sixth to finish 3-4.

“Their starting pitcher had a very good drop ball that kept us off balance early,” WHS coach Brad Horton said. “We moved up in the box and closer to the plate to take away the outside pitch. The second pitcher threw a rise ball, so our batters had to keep their hands closer to their bodies, so they could get the barrel of the bat on the ball. Ava Shae got us going with her home run and Olivia stayed back, got closer to the plate and put a great swing on her home run. I’m proud of the way everybody adjusted at the plate.”

The Pam Pack baseball season is over after a 5-1 home loss to conference foe North Pitt. WHS was the 16th seed and finished 12-10, while #17 North Pitt advances to play top-seeded East Duplin.