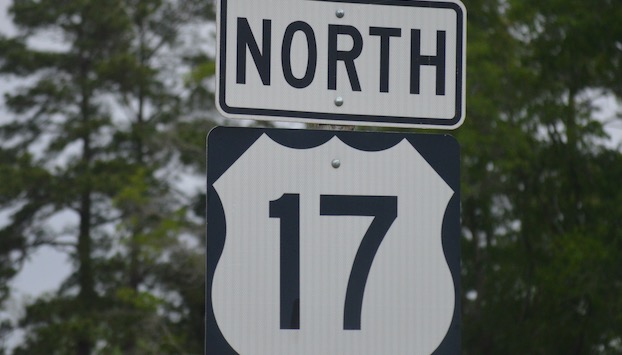 The project should be finished sometime in 2026 according to transportation department officials. (Steve Barnes/Washington Daily News)

The rural landscape between Washington and Williamston will undergo some changes this summer as the U.S. 17 widening project begins.

The North Carolina Department of Transportation recently awarded the $86 million contract for the project to Branch Civil of Roanoke VA to widen the 10.6 mile stretch near the Old Ford community north of Washington to the existing four lanes just south of Williamston.

“We think it (the widening) will have a tremendous impact on not only Beaufort and Martin counties, but throughout the region,” Beaufort County manager Brian Alligood said. “It’s a huge step forward in transporting goods easier and faster from here to the port in Virginia and points along the way. It’s an important connector to Highway 64 and folks will be able to get to the Virginia line on a four lane road all the way.”

DOT approved the project, along with several others, in 2017 after a years-long process that involved getting on the Statewide Transportation Improvement Program list, then waiting for funding to become available. Work was supposed to start in 2020, but COVID-19 and other factors caused a delay until now.

DOT spokesman Tim Hass said the project won’t involve any detours, but secondary roads close to the project could be closed temporarly to allow those roads to get tied into the new highway. Hass also said two lanes will be open at all times during the project.

Under the contract’s terms, work can begin as early as July. Work to relocate utility lines along the route has already started

The project is scheduled to be completed in the summer of 2026.  Hass also explained the project’s cost is based on the length of the road involved, which is longer than usual is this case. He said a shortage of materials and inflation are also contributing factors.

“There should be some development along that corridor, once the work is complete,” Alligood said. “It’s a great location for business or industry once the road is widened and it will also make the road safer. Drivers can get impatient behind slow-moving farm or other vehicles and two lanes in each direction will solve that problem. We’re excited for the work to begin.”