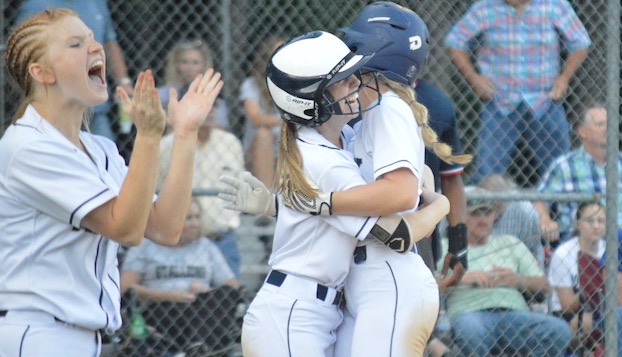 Freshman catcher Addison Miller lined a two-out single to left field to score Laci Campbell with the season-extending run in the bottom of the ninth inning for a 1-0 Washington High School third round playoff victory over South Columbus Tuesday night.

The top-seeded Pam Pack (24-0) struggled all night against Stallions senior starter Peyton Duncan, who struck out 15 WHS batters and gave up just a pair of hits until the final inning.

The Pack advances to Friday’s fourth round at home against the winner of fourth-seeded Camden County (19-3) and #12 East Duplin (19-5).

WHS freshman Emma Orr matched Duncan out for out on the mound, pitching a two hitter with seven strikeouts.

Washington finally broke through in the bottom of the ninth with Campbell’s one-out double to left, Shaelee Crimson’s bunt that moved her to third and Miller’s game-winner than brought her home.

“I knew Addison was going to come through for us because she had a better at-bat every time,” coach Brad Horton said. “Their catcher left the game with an injury while she was running the bases in the top of the 9th and I knew we had to capitalize while the pitcher was getting used to the new one. Laci got a great look at the left fielder on her hit and stretched it into a double on her own. I had Shaelee bunt to get Laci to third to make the pitcher a little more uncomfortable. Addison came through and Emma was consistently tremendous in the circle. She was in charge the whole night and kept a very good team in check. Our defense was solid and we needed everybody’s best effort to advance.”

Crismon and senior Abby Gardner had the other two WHS hits.