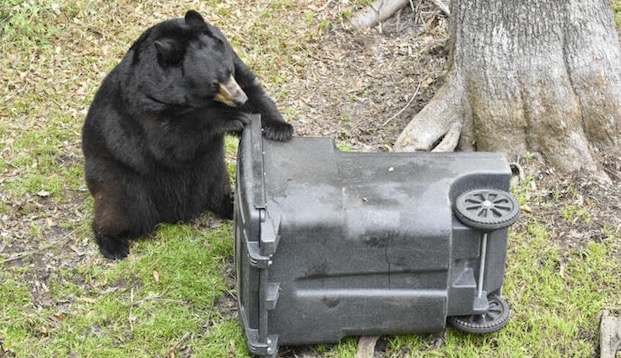 The N.C Wildlife Resources Commission is already seeing a spike in black bear reports this spring. This comes as no surprise since the state’s bear population has grown over the past 50 years and the residential footprint has grown.

People are moving closer into bear habitat and creating increased opportunities for bears to approach their property, specifically by leaving out food sources.

BearWise is a national educational program the Wildlife Commission employs that was developed by bear biologists. “Most bears that wander into a residential area will quickly retreat to their natural habitat, particularly if no food source is around.

By following the six BearWise Basics the public can prevent potential conflicts and live responsibly with bears.

They are:  Never feed or approach a bear. Intentionally feeding bears or allowing them to find anything that smells or tastes like food teaches bears to approach homes and people to look for more. Bears will defend themselves if a person gets too close, so don’t risk your safety and theirs.

Secure food, garbage and recycling. Food and food odors attract bears, so don’t reward them with easily available food or garbage. Store bags of trash inside cans in a garage, shed or other secure area; or use garbage cans or trash containers with a secure latching system or that are bear resistant.  Place trash outside as late as possible on the morning of trash pick-up-not the night before.

Remove bird feeders when bears are active. Birdseed, other grains and hummingbird feeders have high calorie content making them very attractive to bears. Removing feeders is the best way to avoid creating conflicts with bears. Never leave pet food outdoors. Feed pets indoors when possible. If you must feed pets outside, feed in single portions and remove food and bowls after feeding. Store pet food where bears can’t see or smell it.

Clean and store grills. Clean grills after each use and make sure that all grease, fat and food particles are removed, including drip trays. Store clean grills and smokers in a secure area, like a garage or shed.

North Carolina’s bear populations are concentrated in the mountains and Coastal Plain, but the population is expanding into the Piedmont and sightings are increasingly common, usually in May, June and July. This is the time when young bears, called yearlings, are looking for a new home after being pushed away by the adult female as she begins breeding again. While these young bears, typically males, may appear to be wandering aimlessly around, they are not necessarily lost. Most are simply exploring their new surroundings and will move on, particularly if they are left alone and there is no food around.

In almost all cases, the Wildlife Commission advises that the best option is a hands-off approach, allowing the bear to leave on its own. The Wildlife Commission does not trap and relocate bears. There are no remote places to move bears and relocation can be treacherous for the bear, as they are unfamiliar with the new place and the food resources, causing them to attempt the journey back to where they were captured, which they consider home. During that journey, they encounter lots of dangers, including crossing busy roads, often resulting in vehicle-bear collisions.