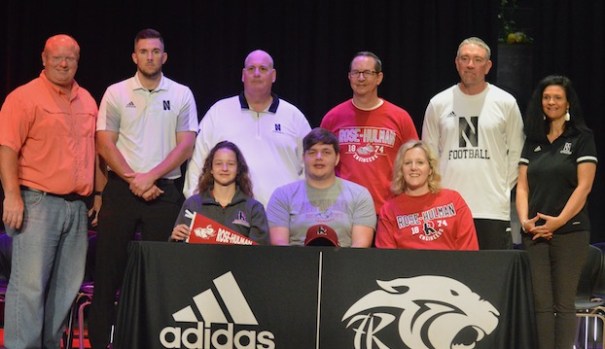 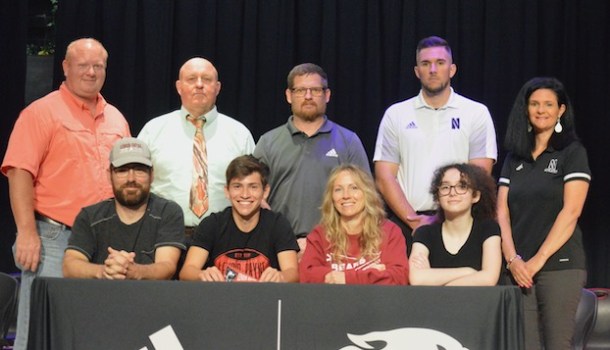 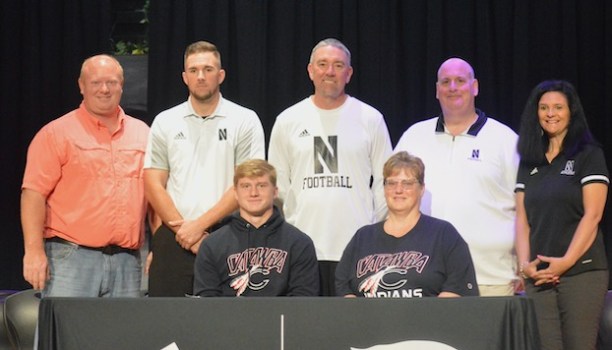 Cahoon, a football offensive lineman, will compete for the Rose-Hulman Institute of Technology in Terre Haute, IN.

Godley will play football for Catawba University in Salisbury, N.C. after a stellar career as a running back/linebacker for the Panthers. He chose the Division II Indians over North Carolina Wesleyan, Greensboro College and Methodist University.

“I felt like Catawba had the most to offer overall,” Godley said. “I liked the campus; the coaches and I want to test myself at the highest level possible. They coaches saw film of me at running back, but I’ll play linebacker if they want. Whatever helps the team is fine with me.”

Godley’s major is undecided and he reports in mid-August.

“I’m very happy for both of them and their families,” coach Keith Boyd said. “They are both great guys and solid students who have earned the opportunity to keep playing.”

Dugan signed to run track and cross-county at Lenoir-Rhyne University, a DII school in Hickory.

He won the 3200 meters and finished second in the 1600 at the east regional meet last weekend and will run both in this weekend’s state meet in Greensboro.

Dugan’s family moved to the area from Pennsylvania in September of 2020. The cross-country team qualified for the state meet, but couldn’t compete because of COVID-19. He ran three events in the state track meet in the spring, the team competed in the state cross-county meet last fall and he’s back in Greensboro again for track.

“He’s done some impressive things while he’s been here and it’s a product of his hard work and dedication,” co-head coach Ole Robinette said. “He’s also a mentor to our younger runners and him getting to run in college shows them that hard work pays off.”

Dugan will major in Engineering Physics and reports August 19th.

“I felt very comfortable in Hickory when we visited and the school’s weight room blew me away,” Dugan said. “It’s a great running environment and I know I can keep improving there.”

All three athletes had fond memories as Panthers.

“Playing for the state championship junior year and beating Southside for the Anchor Bowl all four years are tops for me,” Cahoon said.

“A lot of the yards I gained running the ball came after Landon opened a hole,” Godley said. “It was a lot of fun playing with this group of teammates and I also enjoyed the baseball season that just ended.”

The baseball Panthers won 20 games and made it to the fourth round of the 1A state playoffs.

“Everyone at Northside accepted me quickly after we moved and that meant a lot,” Dugan said. “School had already started and the cross-country team was a way to make friends and meet people. I’ve enjoyed helping the younger runners improve and being on two successful teams with a great group of friends has been amazing,”