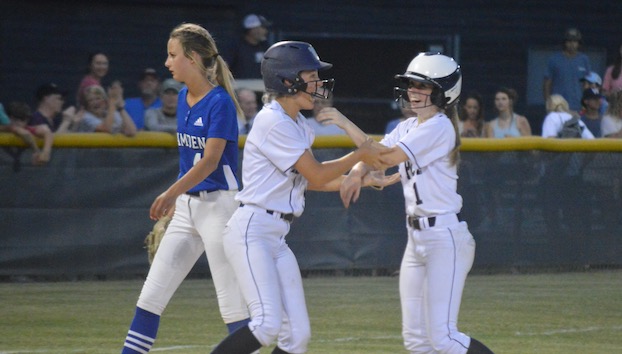 Senior Olivia Paszt whacked a one-out hit to deep center field to score Morgan Eisenzimmer with the winning run, sending the Pack (25-0) into a two out of three series against the Blue Devils (24-1) that starts at home Tuesday.

Senior Morgan Eisenzimmer was hit by a pitch to start the inning, as was the next batter, Laci Campbell. Shaelee Chrismon moved them to second and third with a bunt, then freshman Addison Miler was intentionally walked, bringing Paszt to the plate.

“She just stayed behind the ball and delivered when we needed it the most,” coach Brad Horton said. “What a huge hit for one of seniors with the game on the line.”

After the Bruins (20-4) opened the game with two runs, freshman Addison Miller delivered the game-tying hit in the bottom of the inning.

Camden went ahead, 3-2, in the sixth, but senior Abby Gardner cracked a two-out single up the middle to score Paszt with the tying run.

“Two seniors and a freshman came up big for us to extend our season,” Horton said. “This was a true team effort and we never gave up. Emma (Orr) battled through on the mound and had a big hit during our last rally.

These last two games have been tough on her emotionally, but she’s handled it tremendously well.”

Campbell and junior Ava Shae Mizell had two hits each in the eight-hit Pack attack. Orr gave up three hits with a pair of strikeouts.

“It doesn’t get any easier, but we are excited to keep playing,” Horton said. “We expect more close games next week.”