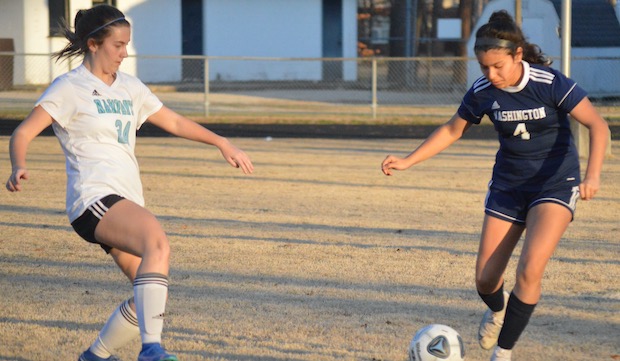 Washington freshman Angelee Higuera was one of several underclassmen who played a big role on the girls soccer team. (Steve Barnes/Washington Daily News)

The Beaufort County high school soccer season is over after Washington and Southside suffered first round state tournament losses.

The Pam Pack were the 20th seed in the 2A playoffs after a 9-8 regular season and a runner-up (8-2) finish to undefeated Farmville Central in the Eastern Plains Conference. Both league losses came to the Jaguars and the season ended with a 9-0 loss at 13th seeded Raleigh Charter.

“Those four were the core of our offense,” first-year head coach Kendall Cox said. “Lilly Davis was one of our key defenders along with Jesmelly Lugo (Jr.), Sidney Smithwick (Sr.), Avery Thomas (Fr.) and Eileen Escallona (Fr.). They were young, but played well and I’m pleased with our season.”

Senior goalkeeper Alexa Davenport, a four-year starter, had 89 saves and will play for Lenoir Community College in the fall.

Junior Lilly Davis led the offense with 13 goals, while sophomores Selena Mondragon and Emma Silva were next with seven.