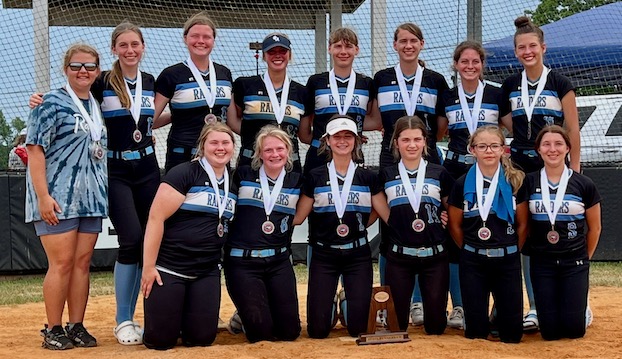 Reagan Stoop put the Raiders on the board first with a 2 run home run in the top of the first.

The Raiders came out hot again Saturday with two first inning runs.  The Eagles scattered five runs across the next five innings for a 5-2 lead going into the bottom of the 6th.

Pungo answered with two runs of their own, putting the Raiders down one run going into the bottom of the 7th. With the game on the line, Ashley Williford drew a walk. Emma Hanna hit a line drive to center, putting Williford in scoring position. Stoop followed with a single, scoring Williford with the tying run.

Melanie Rutledge hit a ground ball to short, but the throw sailed past the third baseman, allowing Hanna to score the winning run to send the Raiders to a winner-take-all third game for the State Championship.

The Raiders and Eagles got a 50 minute rest period as both teams tried to cool off from the near 100 degree temperatures. PCA scored first for the third consecutive game, but Cape Fear responded with four runs.

The Raiders answered with two runs in the third and one in the fifth for a 4-4 tie after five innings.

Cape Fear loaded the bases with nobody out in the bottom of the six and scored twice.

Rutledge started the seventh with a stand-up double. Ella Kate Hanna hit a pop up to right field but the Eagles outfielders ran into each other causing an error and a run for the Raiders. Reese Blackman followed with a game-tying double to score Hanna. PCA had runners at the corners with no outs, but couldn’t score the go-ahead run.

Blackman would make an outstanding catch to get the first out. The Raiders intentionally walked the Eagles clean-up batter. The next batter doubled to put runners at first and third. Stoop walked the next batter to load the bases. Stoop faced a full count with the next batter and the season on the line. In the 14th pitch of the at bat, Stoop fired a close pitch that was called ball four to give Cape Fear the title.

“I could not be prouder of my team,” coach Leigh Stoop said. “They fought back to win the second game to stay alive and did their best in the final game. Everybody contributed to our success and I couldn’t ask for a better group to coach.”

The Raiders finished the season 20- 3 with no seniors on the roster.