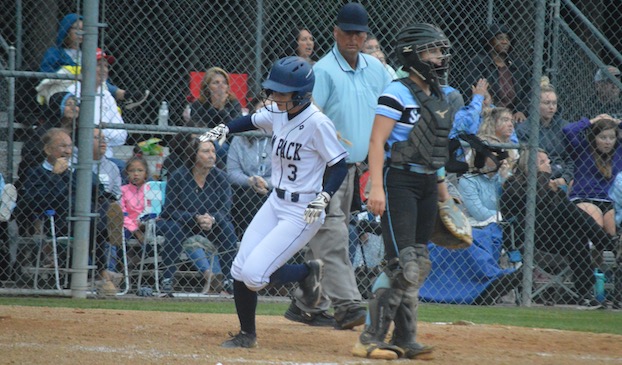 Senior Laci Campbell scored during the 5th inning of Washington’s 4-0 victory over South Lenoir in the first of a three game series to decide the 2A East champion. (Steve Barnes/Washington Daily News)

The Washington High School girls softball team is one victory away from playing for a 2A state championship after a 4-0 victory over South Lenoir in the first of a three game series to determine the East champion Wednesday night at home.

The top-seeded and undefeated Pam Pack (26-0) handed their former conference rival their first loss since the third game of the season with 10 hits and a one-hitter from freshman left-hander Emma Orr.

Game two is Thursday night at 6 p.m. in Deep Run and a potential third game will be in Washington Saturday.

“We used to play them twice a year until this year when realignment put them in a different conference,” Washington coach Brad Horton said. “Our girls have faced their pitcher (senior Rebekah Howard) for a long time now and have lost to her before. It took a while for us to get our bats going, but we did. Emma did a great job staying focused when a couple of calls went against her early. She was very composed and was outstanding again tonight.”

Campbell doubled to center field to score Morgan Eisenzimmer with the first run in. the third inning, Orr singled home Olivia Paszt, who had doubled, in the fourth for a 2-0 lead before Orr allowed the only Blue Devils (24-2) hit in the sixth.

WHS iced the win as Eisenzimmer beat out an infield hit and Campbell scored her with a triple over the center fielder’s head. Shaelee Chrismon’s single scored Campbell and Orr completed the victory with three outs on four pitches.

“We need every fan we can get to come support us Thursday because they are a different team at home,” Horton said. “Their crowd will be loud and I expect a very good game.”