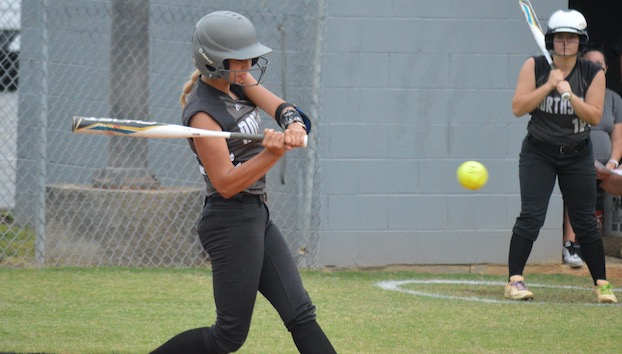 Freshman Samantha Braddy was one of several underclassmen to play prominent roles for Northside this spring. (Steve Barnes/Washington Daily News)

Northside fielded one of the youngest softball teams in the east and played one of the toughest schedules, yet made it to the fourth round of the 1A state tournament.

The Panthers finished 16-8 after a 3-0 loss to top-seeded Bear Grass, a team they defeated and lost to in extra innings during the regular season. The Bears were one win away from the 1A East championship at press time.

Their only other loss to a 1A opponent was a 2-1 decision at conference rival Pamlico County.

They lost twice to still-undefeated Washington, which won the 2A East title to advance to the state finals, and twice to South Central, who lost in the third round of the 3A tournament.

“We played extremely well against a very difficult schedule,” coach Michelle Leathers said. “We set it up that way to test our young team and they passed with flying colors. I thought we had a great season and we’ll have almost everybody back next spring.”

Only senior Paige Sawyer graduates and starting pitcher Bella Boykin should be healthy after breaking a finger sliding into third base at Washington early this season.

“Jaden Clark did a great job on the mound after Bella was hurt, and it will really help us to have both of them next year,” Leathers said. “Emaleigh Cherry started our offense most games and Hannah Black was one of our strongest hitters. We had lots of different players step up and contribute and there were too many highlights to remember. My assistant coaches, Rodney Braddy, Amanda Ussery and Amelia Woolard did a great job also. Everybody got along really well and I’m confident we will make another strong showing next year.”