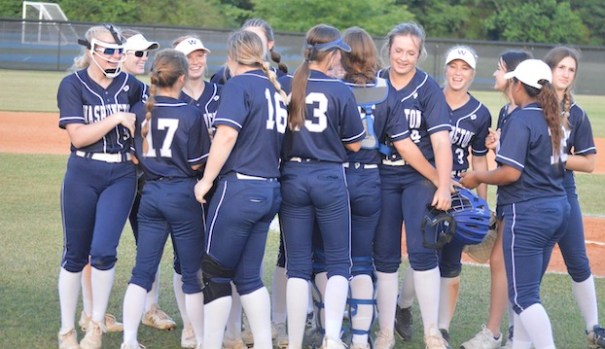 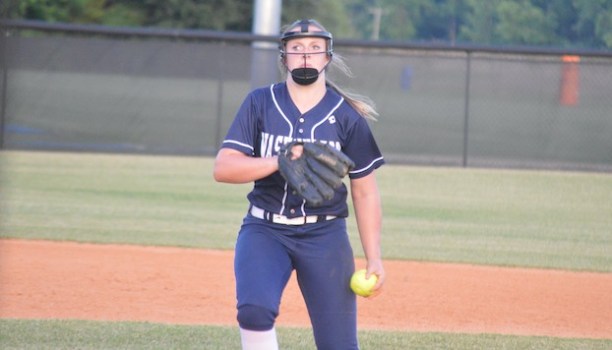 Freshman Emma Orr prepares to deliver the last pitch of the 2-0 victory over South Lenoir that clinched the East championship and trip to the 2A state finals. (Steve Barnes/Washington Daily News) 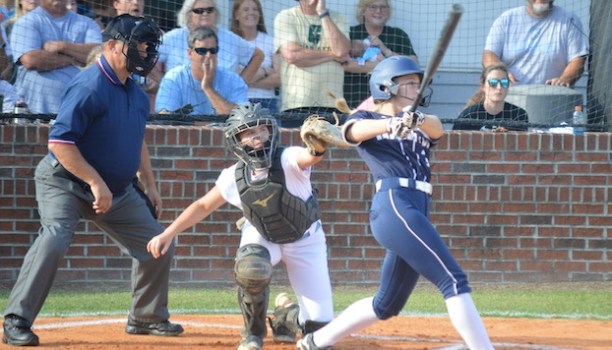 Senior Laci Campbell led the Pack at the plate with a .554 average and 51 hits, including 18 for extra bases. (Steve Barnes/Washington Daily News)

After taking the holiday weekend to relax and enjoy the first East championship in Washington High School softball history, the team returned to practice Tuesday ready to face the challenge of winning a state title.

The undefeated Pam Pack (27-0) takes on defending champion West Stanly of Oakboro (27-4) in a best of three series to determine the 2A titlist starting Friday at 7 p.m. in Chapel Hill. The second game is at 12 p.m. Saturday, with the third game at 3 p.m. if needed.

“That’s where I was hoping we would go,” he said. “Most of our girls play some form of travel softball and have played at a lot of different college facilities, however, none of them have played at Carolina’s field. It’s exciting for us to get to play there and we are looking forward to it.”

West Stanly won last year and in 2019, before COVID-19 canceled the 2020 season. The Colts lost to 4A opponents Mooresville (2-1) and Charlotte Providence (6-5), 3A North Davidson (6-4) and to 2A conference rival Anson County (5-4) in the conference tournament after beating them twice during the regular season.  West Stanly also ended Anson’s season with a 7-4 second round playoff victory. Both teams have shut out South Columbus this spring, 2-0 for the Colts and 1-0 for the Pack earlier in the playoffs.

“We are enjoying the underdog role,” Horton said. “They’ve won the last two and we’ve never been. That gives us the freedom to play relaxed and to focus on winning. I think it’s going to be a great series between similar teams. They probably have more power throughout the lineup and steal more bases than we do, but we have hitting depth throughout the order and play outstanding defense. We know we have a top-flight pitcher and they do as well.”

Junior Lily Huneycutt has been West Stanly’s ace this spring with a 1.51 ERA and 230 strikeouts in 175.2 innings.

Freshman Emma Orr has handled the transition to high school softball to the tune of an 0.54 ERA and 188 strikeouts in 129.2 innings.

“Emma has done amazing things as a freshman, but she’s had help,” Horton said. “Erin Everett is a capable pitcher also and knowing that has helped Emma relax and not carry everything on her shoulders. She also has a great defense behind her, so she knows she doesn’t have to strike out every batter for us to win.”

Junior Teagan Ritchie leads the Colts with 18 home runs and a .446 average.

“A key to winning big games is how well your seventh, eighth and ninth batters in the order perform,” Horton said. “We’ve had good production from different players in those spots during the playoffs and need it to continue. You get back to the top of the order quicker when those batters get on and that will be huge in this series for both sides.”

D.H. Conley (4A) and Bear Grass (1A) will also play for state titles this weekend. The Pack beat Conley, 1-0, early in the season for the Vikings only loss, but didn’t face the Bears.

“It shows what kind of talent we have around here when three teams within 30 minutes of each other are playing in the final series,” Horton said. Most of the girls have played with or against each other in travel ball and we’re pulling for them. We’re going to do our best to hold up our end as well.”