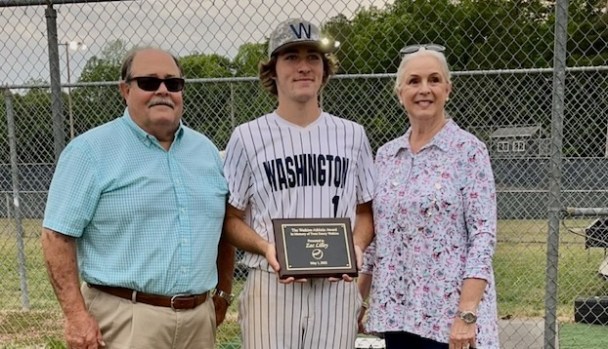 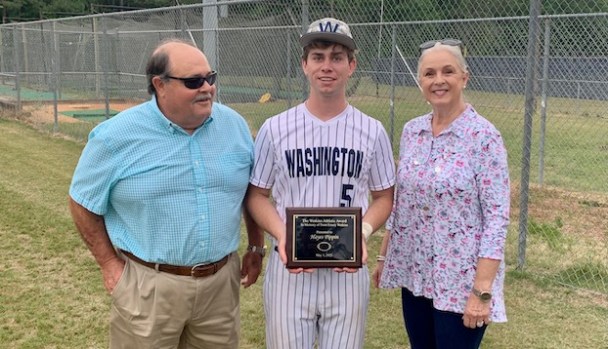 Washington’s Hayes Pippin is the Watkins Athletic Award recipient for football. He also played baseball for the Pam Pack and is shown with Wayne and Kim Watkins. (Submitted)

One of the many things the COVID-19 pandemic affected was a reshuffling of the high school sports calendar in 2021 after cancelling all spring sports in 2020.

With the spring schedule back to normal, Wayne and Kim Watkins resumed presenting the Watkins Athletic Award, in memory of their son, Trent Emory, who died in a motorcycle accident in April 2004.He was a college sophomore, worked part-time and was an assistant coach for the WHS baseball team. The Watkins family has presented two awards annually starting in 2004.

Trent was a four-year member of the Pam Pack football and baseball programs and graduated in 2002. His parents present a $750 award to a senior in each sport along with a commemorative plaque dated May 1, which was his birthday.

Criteria for the awards include strength of character and integrity, a positive attitude with the determination and drive to win and an unquestionable dedication to the team.

“That’s a good summation of what Trent stood for,” Washington athletic director Lane Raper said. “I coached against him his senior year while I was at Southside and we played them in a scrimmage. It was obvious that he worked hard, loved the game and wanted to get better. I’m sure he was that way on the football field as well.”

“Both fit the criteria for this award,” Raper said. “Hayes played basketball as well as the other two sports and always worked hard to prepare himself to play. Zac attended every single off-season workout we had for baseball and both were driven to improve.”

Weaver is a student at Appalachian State, while Anderson is playing football at the Coast Guard Academy.

Ambrose is attending East Carolina University, while Warren is in the Army National Guard and planning on enlisting.

“All these guys are good people and model the traits Trent had and are role models for our younger athletes,” Raper said. “The Watkins family wants to keep Trent’s memory alive and these guys are great examples.”