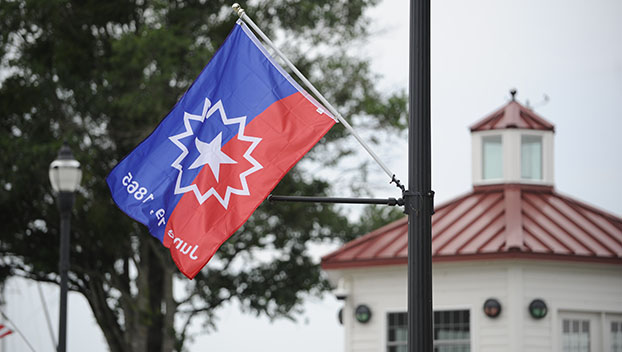 One of many Juneteenth flags displayed on Stewart Parkway along the Washington waterfront in advance of the city's Juneteenth festivities planned for June 18-19. (Ashley Vansant / Washington Daily News)

For the first time in the history of the United States, Juneteenth will be celebrated this year as a federal holiday. On June 17, 2021, President Joe Biden, signed into law the Juneteenth National Independence Day Act, recognizing June 19 as a federal holiday. It was on that day in 1865 that the Emancipation Proclamation was read to enslaved African Americans in Galveston Texas, proclaiming that all slaves in the United States were free. On the 157th anniversary of that historic event, the celebrations of citizens in Washington and around the country will be taking on new meaning.
“If anything makes this year’s celebration special,” said Washington Mayor Donald Sadler, “it’s the opportunity to bring people together to plan it, and focusing on fun and learning actives, and the planned performances for and by our youth. They need to know exactly what it is they are celebrating. To children it’s a new holiday. They need to know why, so they can pass it on.”
Similar to last year’s Freedom of Posterity Walk, city planners have organized what they are calling the Freedom of Prosperity March. The Grand Marshall of the parade will be 90-year-old Washington resident Margaret Randolph King, the granddaughter of Lewis Randolph, who was the organizer of the first known Juneteenth celebration in Washington back in 1896. The parade will be begin at the corners of Gladden and Main Streets at 3 p.m. on June 18. From there it will make its way to Beebe Memorial Park. Along the way organizers will point out historical homes and businesses that have played a significant part in the city’s rich Black history. They will include landmarks such as the home of Bishop Joseph A. Beebe, the third man to be ordained to the office of bishop in the Colored Methodist Episcopal Church in 1873, and “Teachers Row” on Van Norden Street, where many teachers and other residents would rent out rooms to Black teachers who taught at what was then the Washington Colored School. Once at Beebe Park, celebrants will be able to satisfy their savory palettes with all kinds of food. There will be lots of games, performances by the boys and girl clubs, and more learning opportunities about this historic day. Mayor Sadler will also read the city proclamation declaring June 19 an official city holiday as well.
“I’m ecstatic about this event,” said Anthony Tyre, president of the Washington Human Relations Committee. “It will be a very special day as we bring together people from all backgrounds and educate them on the why behind Juneteenth and celebrate this historic day.”
Mayor Sadler added, “we won’t cloud this day with other elements of our rich history. After all, it’s vital in its own right because it marks the beginning of freedom for all persons living on American soil.”
Other planned actives on June 18 include the Greater Beaufort County Historic Juneteenth Celebration, which gets underway at 11 a.m. on the front steps of the First Presbyterian Church. According to the event organizer, Leesa Jones, executive director of the Washington Waterfront Underground Railroad Museum, historical records indicate the reading of the Emancipation Proclamation took place on those very steps in January of 1863.
“In organizing the event, I wanted to plan something for all people, so they could come out and celebrate together on this holiday,” says Jones. “But to also learn about its history, why the proclamation was needed, and the role Washington played in the history of this country. ”
The opening ceremonies will include the reading by many of the Emancipation Proclamation, the raising of the Juneteenth flag, an explanation of the significance of its symbols and colors, and followed by the presentation of a Juneteenth flag to R. G. Harding, a direct descendent of a Black Civil War Soldier. The ceremonies will also include the reading of a poem written by John Randolph, who was enslaved in Washington at the time, by a direct descendent of his, Naomi A. Randolph Hwesuhunu, and comments from city council members. Everyone will be asked to join in the singing of “Lift Every Voice and Sing.”
Following the opening ceremonies participants will have information stands in the park near the Underground Railroad, at or near their business and along the waterfront. All will have and share information about the Black experience in Washington going back as early as 1790. However, Jones is quick to point out this is not just a Black holiday, but one that celebrates what we all have in common, freedom, and why it is so important to any group of people.
“This day is extremely important for me, not in terms of it being a legal holiday,” says Jones, “but to give pause and think about all of the sacrifices and all of the lives that were lost fighting for freedom. It just makes me feel these lives were not lost in vein. Those people can no longer tell their stories. Juneteenth now bears witness to the sacrifices they made through freedom-seeking attempts or fighting in the revolutionary or civil wars to gain freedom. Juneteenth bears witness to the honor that they all deserve.”