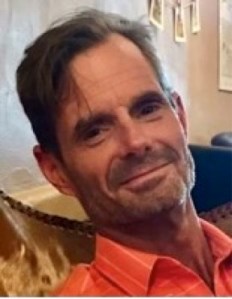 Scott “Sam” Murray passed away on Saturday, June 11, 2022.  He was preceded in death by his sister Rebecca Wolf and is survived by his wife Renee Shook Murray, children- Samantha Murray, Clay Murray, Callie and Trey Whitaker, Garrett Cline, Griffin Cline, granddaughter Aria Whitaker, his mother Edna Murray, brother Tom Murray, brother in-law Mason Wolf, along with many nephews, nieces, and life long friends.
He was born on February 13, 1966, and lived primarily in Texas, Virginia, Mississippi, and North Carolina. Sam acquired a degree in finance from the University of North Texas, College of Business in Denton, TX. While in Texas, he was a rodeo competitor in team roping. Sam also enjoyed surfing and was a pilot who logged thousands of hours across the country. Sam was involved in church groups and mission teams in all the cities he lived in. Husband, father, and grandfather were the titles he cherished most. He had a servant’s heart and was Chief Encourager at Large to everyone he met.
A celebration of his life will be held Friday, July 1,, 2022 at 11 a.m., at Church of The Good Shepherd, 2425 N Market Street, Washington, NC 27889. In lieu of flowers, contributions may be made in his memory to either Ronald McDonald House Charities or St. Jude Children’s Research Hospital, two worthy causes he was passionate about.
Ministry of Comfort Entrusted to HEAVENLY ARMS FAMILY MORTUARY & CREMATIONS SERVICES, Washington, North Carolina.