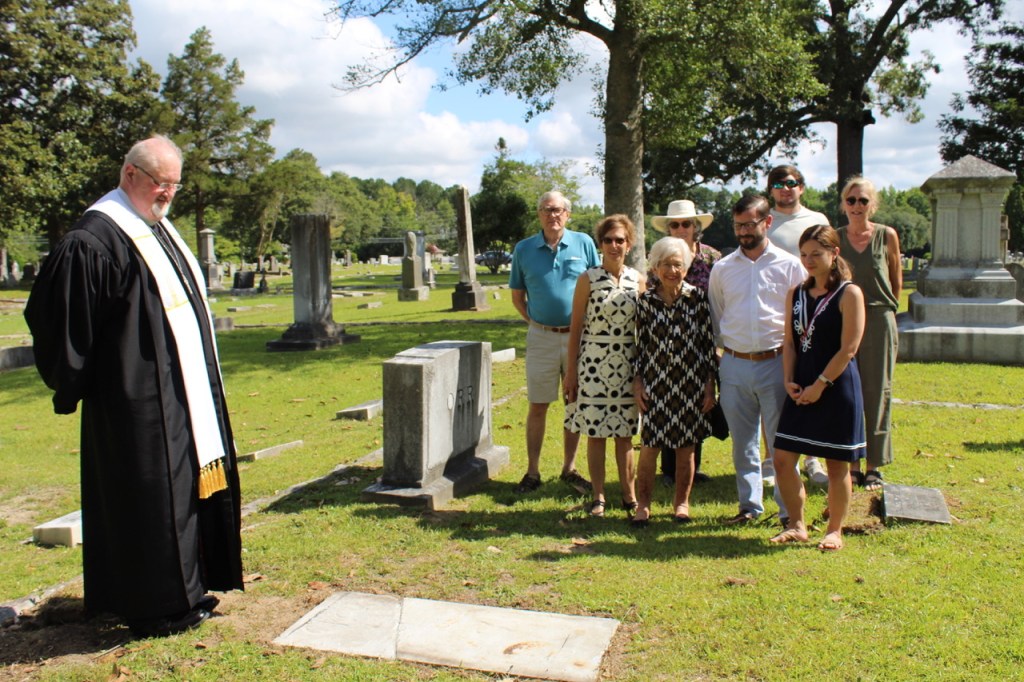 It’s not too often that one discovers a tombstone in their backyard, let alone one that is 200 years old and packed with history. Meet Tammy Langdon, who can now attest to the aforementioned.

Langdon purchased her home at 414 W. Main St. in 2018, while still living in Winston-Salem. She has since retired, and moved to Washington in April of this year, after 35 years with Hanes. She says to her amazement, she first discovered the cracked and very weathered headstone, just lying in her backyard in 2018.

“I thought that was very unusual for it to be there, and I certainly couldn’t move it because it was so heavy,” Langdon said. “So, I just left it alone.”

After moving in this year, she found that the headstone had found a new resting place, nestled on its side amongst the tall grass, leaning up against her shed. As it turns out, it had also been discovered one day by the custodian at the George H. & Laura E.Brown Library, Perry Harper, who saw it lying in the yard, and took the liberty to move it. Harper told library historian, Stephen Farrell, about his find, the two met with Langdon, and the true detective work began.

As Farrell explains, after a thorough cleaning and the removal of what was thought to be at least 150 years of dirt and grime with the latest 21st century technology has to offer, a paintbrush and a bottle of water, they discovered that it was the headstone of a Luther Fowle, who according to the date on the headstone, died on June 24, 1822. And of course the question beckoned, who was Mr. Luther Fowle and how was he related to the Fowle family.

“When I first saw the name Fowle appear, as the puzzle began to unravel,” said Farrell,  “I thought it might be that of Josiah Fowle, who had helped to start the family merchant business in Washington with his two other brothers, Luke and Samuel. It is believed that Josiah died at sea at the hands of pirates in 1822. But as the water and paintbrush slowly revealed the full name, we had come across yet another piece of Washington’s rich history that needed some solving.”

As a historian, Farrell makes a living out of taking all of the existing pieces of the puzzle, finding as many of the missing pieces as possible, and then putting together what he has to create a canvass, which often reveals another glimpse of times past. So, after digging through throngs of information about the Fowle family in the library’s history center, he found the diary and other documents from Martha Matilda Fowle. He learned that Luther was born on March 7, 1801 in Woburn, Massachusetts, home to the Fowle family. He also discovered a letter penned by Luther Fowle in December of 1821. It indicated that he and his brother James, two of the 13 siblings, were headed to Washington to join their brothers Josiah, Luke and Samuel and help with the family run shipping business. Six months later, he passed away.

Farrell says records show that Luther was then buried in the old cemetery on Market Street, where Capelli Salon and City Hall now stand.

In 1890, according to Farrell, a new city ordinance was issued which no longer permitted the burial of people within the city limits of Washington. It was at that time he says that the city began digging up gravesites at the Presbyterian and Methodist churches, and moving them to Oakdale Cemetery. The Fowle family had been interned behind the Presbyterian Church. But when the graves were moved to Oakdale, there were no records of a Luther Fowle.

“It is my belief,” said Farrell, “that his headstone was removed from the old cemetery on Market Street, sometime in the 1890s and placed in the yard of “Bee” Fowle-Morton, the great-great- grand-niece of Luther Fowle, where Langdon now resides. And to our knowledge, it has remained there the entire time.”

As Farrell points out, folks in those days were buried in pine boxes, and after 70 years and acts of nature, had simply disintegrated away, thus only the headstone was moved.

With the help from Washington’s Public Works general superintendent Jerome Tyson, who oversees Oakdale Cemetery, the headstone, showing the scars of its 200-year sojourn, has been repaired, and will find its final resting spot with the rest of the Fowles at the family plot in Oakdale. A small ceremony will be held there Friday, June 24, at 10 a.m., the 200th anniversary of the passing of Luther Fowle.

“We felt it important and appropriate to intern his memory with the rest of the family,” said Farrell. “One that has been recovered and restored after having been lost for over 120 years in the backyard of a home on West Main St.”

Said Langdon, “It makes me feel really, really good that he is not forgotten, and his memory, in the form of a headstone, can be there with the rest of his family. It’s just extraordinary that 200 years have passed.”

Farrell says a find of this historical significance, particularly that of a member of the family that was so important to Washington’s growth and history, is truly unprecedented here, as well as the state, and the rest of the country. Just one more mystery that has been solved and put to rest here in Washington, he said. And now for Farrell, it’s on to the next.