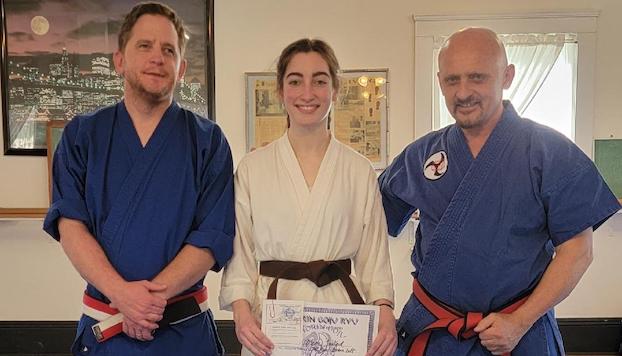 The Washington Karate Academy held a brown belt exam for Mena Tankard age 16. Mena had trained and attended classes regularly for eighteen months since testing for her green belt exam in October 31, 2020. The exam lasted almost 5 hours from 10:30 AM to almost 3:30 PM nonstop! The exam started with Mena reciting Japanese vocabulary and later, giving names of the genealogy instructors before David Warren; Hanshi. Mr. Warren teaches that it is very important to know your martial arts lineage history as well as knowing your family lineage tree. The WKA’s lineage is the Okinawan Goju Ryu lineage. After giving the oral history; Mena had to perform 9 empty hand katas (forms) and 4 kobudo katas (weapons forms); illustrating the six foot Bo, tonfa, and sai. Hand drills done from memory, Kumite sabakis (fighting movement) drills). Several new kicks for brown belt, executed to the mirrors and to the focus pads for contact and power. Break falling and mat techniques illustrating aspects of Judo. The most important part of her exam was the 19 gyakute waza or self-defense techniques which derived from the 9 empty hand katas (forms) that Mena had to perform for power and realism. Showing real life self-defense and the educational knowledge of the secret internal moves in the katas is very important and Mena did an excellent job showing this to Chandler Renshi who gave the exam and Warren Hanshi (Chief Instructor) who presided over all, on the exam. Mena used Chandler Renshi as her attacker in the 19 self-defense moves who outweighed her by 50 pounds! In all 19 self-defense techniques, Mena had to throw and or pin Renshi to the mats! Mena is the 44th student to make brown belt, since June 1985; when Mr. Warren opened up his dojo 37 years ago. Not many students make it to brown belt. The first brown belt exam was on Jan 23, 1988; 34 years ago. Eight of the forty four that have made brown belt; eight have been girls! “Mena will make a great assessment to the dojo,” Mr. Warren stated.