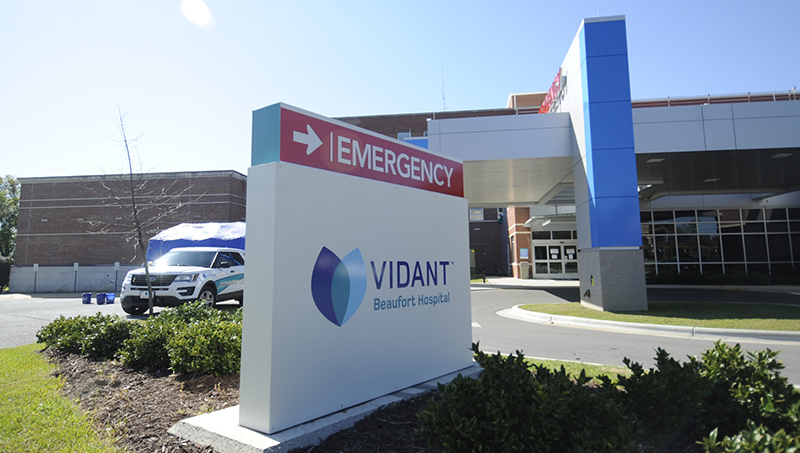 Vidant Beaufort Hospital was one of fewer than 25 North Carolina hospitals to spend more on charity care than it claimed in nonprofit tax exemptions in 2019, according to a study referenced by State Treasurer Dale Folwell in a scathing report “exposing how North Carolina’s major hospital systems profited while others suffered during the economically devastating pandemic.”

Folwell is calling on the state’s largest hospital systems to lower costs in the wake of reports analyzing North Carolina hospitals, the majority of which are nonprofit.

“After taking COVID-19 relief dollars meant for struggling hospitals, North Carolina’s dominant hospital systems scored record profits during the pandemic,” according to a press release issued by Folwell’s office. “The seven largest hospital systems recorded billions of dollars of growth in cash and investments, but these nonprofits dedicated only a sliver of this windfall to increasing charity care to patients hard hit by the pandemic in 2020.”

At Washington’s Vidant Beaufort Hospital, charity-care spending outstripped the value of its tax exemption in 2019, according to a report citing an analysis by Johns Hopkins Bloomberg School of Public Health. However, parent system Vidant Health benefitted from an estimated tax exemption of $148 million in 2019-2020, nearly double its spending on charity care. The system grew its net position to $775.6 million in capital assets with unrestricted reserves of $899.8 million, according to the report.

Vidant Beaufort Hospital recorded a total profit margin of -2.66 percent, according to researchers’ analysis of hospital finances, which relied on Form-990 tax filings because Vidant Health did not publish bond reports. The analysis has limitations due to the “lack of transparency surrounding hospital finances and community benefit spending.”

Low and negative profit margins did not stop Vidant Health from “enjoying record profit margins” during the pandemic, according to a follow up report released on the North Carolina State Health Plan website.

Requests for comment on the study were not returned by a hospital spokesperson by deadline for this article.

The system is one of seven specifically addressed in the report.

“Current tax exemptions have failed to hold hospitals accountable for the provision of minimum levels of charity care. They do not motivate hospitals to provide sufficient care to those who can least afford medical bills.”

Folwell, who in his role as treasurer oversees the State Health Plan for teachers and state employees, called on the North Carolina’s hospital systems to use excess revenue to lower costs for patients or return taxpayer-funded relief.

“These entities, who disguise themselves as non-profits, have lost their mission,” Folwell said in a June 22 press conference. “They have turned into stock market, private equity and real estate development firms versus healthcare firms.”

“ECU Health has repeatedly made it clear it serves one of the most difficult health care markets in the nation and primarily relies on government pay, Medicare and Medicaid to meet its mission to improve the health and well-being of rural eastern North Carolina. Without this funding, we would not be able to provide the high-quality care our region of more than 1.4 million people depend on.

We remain concerned by the conclusions the Treasurer continues to attempt in his reports and press conferences. The facts are that ECU Health’s operating margin dropped from 2.1% in FY 2020 to 1.8% in FY 2021. ECU Health, like most rural health systems, has historically operated with very thin margins and all profits are re-invested in infrastructure, expanded services and new medical equipment that improves the health outcomes of those we serve. In addition, ECU Health provided more than $92 million in charity care in 2020 and more than $50 million in uncompensated care / bad debt. The suggestion that ECU Health is recording high profits is not consistent with the current economic reality facing rural health care nationwide.”