Warren is ready to contribute 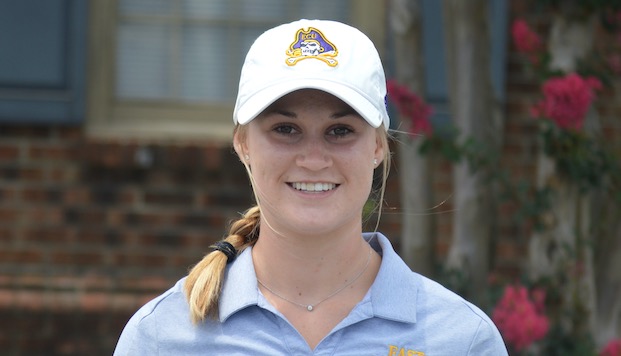 Grayson Warren finished one shot away from a state golf championship her senior year at Pungo Christian Academy in 2019. She shot a one-over par 73 at the Bryan Park Players Course in Greensboro and accepted a scholarship to play at East Carolina. She grew up in Beaufort County as a Pirates fan and was looking forward to starting her collegiate career. After two weeks on campus, she realized it was going to take longer than she thought.

Grayson: We had eight girls on the team last year and only five could play in the tournaments. C.C. Buford, my head coach, told me she red-shirted her first year (at College of Charleston) and went on to have a great career. I talked to one of my teammates who had red-shirted and she told me it was a good decision. I took everything into account and it turned out to be a great move.

Grayson: It was overwhelming at first to come from a small environment at PCA to a major university. I had no idea what I was getting into and it took me about a month to find my groove. It was golf six days a week with Wednesday’s off. Three of those days, we had morning workouts that included weight-training and mobility drills, then went to the course in the afternoon after class. My coaches told me I had potential, but I needed the year to grow, and that turned out to be right.

Grayson: It took that mental strain off me and let me get used to the practice routine and handling my classes. I am a semester ahead thanks to my advanced classes at PCA, so I’ll have my Master’s by the time my eligibility is up. I had also just started working with a private swing coach and that let me get used to him and focus on improving my game instead of worrying about where I would finish in a tournament.

Grayson: Yes. In fact, they encourage it. All my teammates have their own coaches. It’s hard to manage a college golf team and that allows our coaches to focus on the other parts of our game and the details that go into to overseeing our program.

Grayson: Missing out on the travel. They went to a tournament in Chattanooga where some of my friends from summer golf were playing and they went to Georgia and Florida. They toured the golf Hall of Fame in Florida and I was a little sad that I wasn’t there. My teammates were very supportive and kept my spirits up. They told me good things were coming and they were right.

Grayson: We had four tournaments in the fall last year and seven in the spring, with only one at home each season.  Each was 54 holes, with 36 on Monday and 18 on Tuesday. The team left on Saturday, with a practice round Sunday. One of the first things the coaches told us was to let our professors know our schedule on the first day and to stay ahead of our work. We had to take the tests before we left and couldn’t make them up after. Red-shirting helped me learn that routine also, because academics are very important on our team.

Grayson: Business Management. My mom is in the staffing industry and I’m interested in going into that also.

Grayson: I’m much more settled than a year ago. I’m confident in my game and am really looking forward to competing. My ball-striking, both off the tee and in the fairway, has improved a lot. I’ve always felt my short game was a strength and it’s better also. I’ve played two Carolinas Golf Association tournaments this summer and didn’t realize how much I missed the competition. I know I’m at the right school with the right coaches and am really excited to contribute to our success this fall.