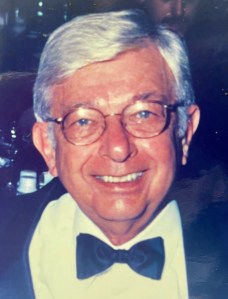 Known to his family and friends as Bill, he was born in Patterson, New Jersey, Bill grew up the son of Dutch immigrants and moved to Pantego, North Carolina where his father’s dream of a farm was born.  Bill helped start and stabilize Slot Farms before being awarded a music scholarship to attend East Carolina College. After graduation Bill joined the federal government In Norfolk, Va.  He transferred to the Philippines in the mid-1960s and met his wife, Mary.  Bill and Mary travelled together throughout their lives and enjoyed the wonders of this world.  They shared this love with their children and grandchildren.

After moving back to the United States, the family settled in Washington DC where Bill served the General Accounting Office until his retirement in 1991.

Bill is survived by his wife of 54 years, Mary Cooney Slot, originally of Boston, MA, and his two children, John (fiancée – Leslie) and Anna-Marie (husband – Widemar). He adored his 4 grandchildren Anna-Carolyn, John, Julia and Elsanore. Bill is also survived by his sisters Marie Singleton and Carol Van Essendelft.

In lieu of flowers, donations can be made to the Mackey & Pam Stansell House, Coastal Hospice, 1500 Ocean Parkway, Ocean Pines, MD 21811.