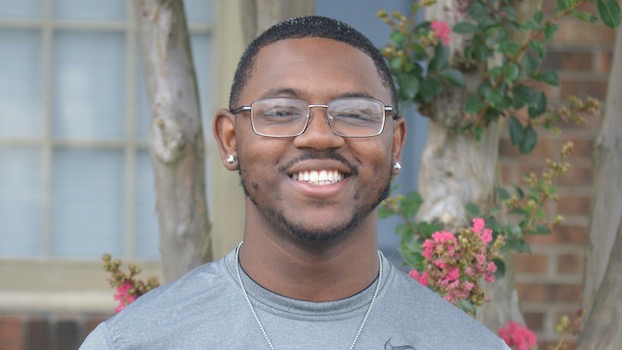 Former Washington High School football standout Jaden Hambric made several adjustments during his freshman year at Saint Augustine’s University in Raleigh. Hambric went from being an All-Conference running back on the Pam Pack’s championship team to a rookie earning his playing time on a team that was winless until the last game against their rival, Shaw University.  He’s ready to take what he learned and apply it to more playing time this fall.

Jaden: There were two things. First, I was used to starting without really having to earn it. Everybody is good in college, so there is a lot more competition for playing time and the freshman all have somebody older at their position. Learning to wait was hard to get used to. The other thing was adjusting to morning practices. Our coach (David Bowser) believes that getting up early and putting your work in sets the tone for the rest of the day. We had practice from 5:30 to 7:30 every morning during the season, which meant a 4:45 wake-up call to be on the field by 5:15. You were considered late if you got there at 5:30, which meant push-ups. I will admit to doing my share.

Jaden: We lifted two days a week after practice depending on our position, then had breakfast. Classes started at 8 or 9 depending on the day and I was usually done by 2 p.m. We had study hall and time to do homework on our own, then dinner. Lights were out at 10 during pre-season camp, then we were on our own once school started. I was usually asleep by 11 and I took a nap during the day. My sleep schedule was totally messed up at first, but I got used to it.

Jaden: That you have earn everything. It hurt my confidence at first to go from always starting to not playing, but my coaches and teammates kept encouraging me to work harder and be more accountable. I learned that not doing the little things to improve held me back and that’s why I’ve hit the gym a lot this summer. I know what to expect this fall and I’m going back to earn my spot. I had a good spring game and have put myself in a good position to start pre-season camp.

Jaden: I’m taller and actually 10 pounds lighter. I felt like I needed the extra weight at first, but it actually held me back. I am a physical runner, but I’m stronger now, so being lighter and stronger should be better overall.

Jaden: It went well. I’m changing my major from Criminal Justice to Health and Physical Education. I really enjoyed my Criminal Justice class last year because a former FBI agent taught it and we studied real cases, but it’s not the career path for me. There’s more quizzes and papers in college and the professors take attendance. You can blow a good grade with poor class attendance, so I made sure I was there. There’s more leeway and choices, but I learned to lock in and study.

Jaden: I think it will be great. I showed Ryan’s film to Coach Bowser, which made him interested and encouraged him to take a longer look at William also. I don’t really know Kenjray that well, but he’s a good player and it will be great to have him with us. I showed Ryan and William around on their visits and will help them adjust to the morning practices and all the other stuff when they get here for camp.

Jaden: He is fully recovered and hasn’t had any set-backs. He’s at Pitt Community College working on his welding certification. It really wasn’t a big deal for me to do it. My back hurt for about three days and that was about it. He’s my brother and I’d do it again if he needed it.