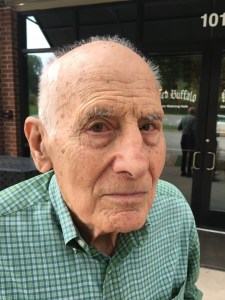 MOORESVILLE – A mule named Callie fell on Leonard Sullivan when he was a young man. By most accounts, he could have been killed and he should have been seriously injured. But as it turned out, the incident was just one of many factors cementing his determination that life on the farm would not be his fate.

Born into a tenant-farming family in rural Beaufort County on April 18, 1933, Leonard attended school in Bath – North Carolina’s oldest town – and was voted best looking in his graduating class. A tribute he always credited, in the self-deprecating and humorous way that truly reflected his character, to some pretty slim pickin’s in that particular place at that particular time.

In the years that followed, he served in the U.S. Army, but never really identified himself as a veteran because he felt that honor should be reserved for more devoted service personnel and, as his oldest son explained, Leonard believed the Army and the G.I. Bill did much more for him than he ever did for the Army.

He played baseball at East Carolina, married his high school sweetheart – Lou Ellen Brooks – and started a family, and eventually attended the University of North Carolina earning a degree in journalism.

While working not far from his roots in eastern North Carolina, Leonard got a call from Mooresville Tribune publisher and editor Tom McKnight and, in 1960 – in a move most folks around Bath considered a journey to the far-off West – with two sons in tow and another on the way, the Sullivans moved to Mooresville.

For the next 30-plus years, as a reporter, then editor and later as a partner with J.D. Chamberlain in what became a multi-generation Tribune operation, Leonard invested himself and his family in their adopted community. In the process, he inherited McKnight’s role as the writer of a syndicated, folksy weekly column – called “Uncle Dan from Doolie” in the Tribune, but localized to reference other crossroads, trading posts or country stores with cracker barrel conversations when it ran for years in dozens of community newspapers from West Virginia to Montana.

He was a people person, a great storyteller and he loved jokes. He cherished words, the power they carry and the magic feeling of creating the exact appropriate phrase – like what he considered the best sentence (with some family relevance understood) ever written: The “Shut up, he explained” in a Ring Lardner short story about a father’s response when his son asked, “Are we lost?”

He admired all styles of writing, from the Bible to Kurt Vonnegut, and into his late 70s would dissect articles in The Economist and have passages underlined and points to emphasize scribbled off to the side in preparation for a challenging discussion with anyone who dared to answer, “Have you read this?”

Several years ago, Alzheimer’s began eroding pieces of his personality, but there were still moments. He’d often share that his favorite gravestone quote was “I knew this was coming, but not this soon” and even in the later stages of the disease well into his 80s, when playfully advised to “behave himself” around his nurses, he’d reply, “What choice do I have?”

Leonard, the son of Theodore Rayfield Sullivan and Hilda Virginia Waters Sullivan, died at his home in Mooresville on Saturday, July 23, at 89. He was predeceased by his parents, his wife, and his older brother, William Earl Sullivan.

Services will be held Saturday, July 30, at Cavin-Cook Funeral Home & Crematory in Mooresville. Visitation will begin at 1 p.m. and a memorial service will be held at 2. Inurnment will follow at a later date at Salisbury National Cemetery.

The family wants to extend heartfelt thanks to the Jenlei’s agency for providing home care and friendship for nearly three years.

Cavin-Cook Funeral Home, Mooresville, is serving the family of Mr. Sullivan. Condolences may be made to the family at www.cavin-cook.com.