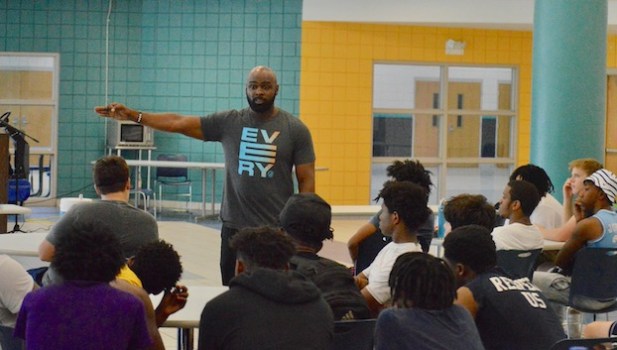 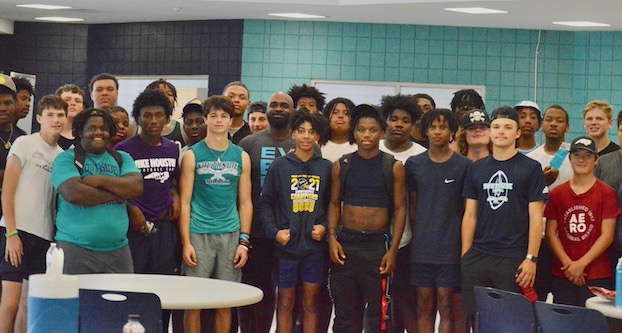 Around 50 Seahawks football players sat quietly in their chairs, still absorbing what they had just heard.

Southside athletic director and defensive coordinator Andrea Quinerly asked Jenkins, a 39-year old Fellowship of Christian Athletes representative and character coach for the ECU football team, to share his life experiences in front of the team as fall practice starts next week. It wasn’t a light-hearted tale of triumph by any means.

“I have been raising kids since I was a kid,” Jenkins told the group. “Drug and alcohol abuse ran deep in my family. My mom used to leave four kids at home for a couple of days sometimes before she came back and I was in charge of the younger ones. We moved around a lot and I went to three different high schools. I failed seventh and ninth grade, but still played football in college. Football gave me stability and I always had multiple coaches who cared enough about me to start me on the right path.”

Jenkins told the Seahawks that they can’t pick and choose when they want to work and consistent work builds good character.

“Winners work all the time,” he said. “You win at home by making your bed, helping your family with chores and picking up after yourself. You win in the classroom by paying attention, doing your work and studying for tests. Then you take all that to practice with you and win there too. You can’t get tired of doing the right thing.”

Senior offensive and defensive lineman Xavier Ham was among those who got the message.

“It was a lot to take in and he hit us with all of it.” Ham said. “It’s possible to go far in life no matter what your circumstances are if you work for it. He made me realize that small things matter and it should make us closer as a team knowing you can trust your teammates and coaches to help you if you have problems.”

Jenkins bounced around from Greenville, S.C, to Kinston, New Bern and then to Fayetteville St. to play strong safety. He currently lives in Greenville, N.C.

“I had an offer from North Carolina St., but my grades weren’t good enough,” he said. “Everywhere I went, I seemed to gravitate to the same kind of people that weren’t good to hang out with. I try to get across to these guys that they have to like themselves first before they can like others. Stop comparing to others on social media and be yourself. I want to plant a seed of hope that they can succeed if they are willing to work.”

“Winners work is a great message and I hope it hits home,” Carrow said. “It might not tomorrow or next week, but even if it does six months from now, it will be worth it.”