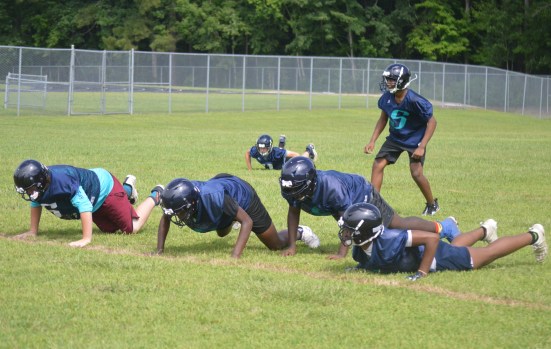 Members of the Southside Seahawks football team go through a conditioning drill during the first day of practice Monday. (Steve Barnes/Washington Daily News) 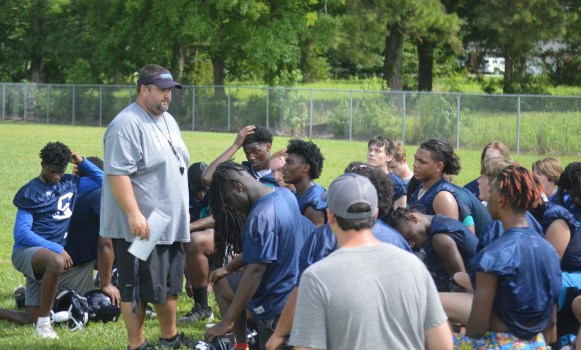 Head Coach Jeff Carrow told the Seahawks to be ready for a full week of practice as they prepare for the eight-team scrimmage they are hosting Aug. 10. (Steve Barnes/Washington Daily News)

After a summer of optional workouts, things got real for the Northside Panthers, Pungo Christian Academy Raiders, Southside Seahawks and the Washington Pam Pack as the first week of official practice started Monday.

The Panthers and the Seahawks opted to beat the heat and potential summer thunderstorms with morning practices, while the Pam Pack and the Raiders will work out in the evening for the time being.

Washington, Northside and Southside combined for a 31-7 record last fall, making for one of the best overall seasons in recent memory. The Pam Pack (10-3) made it to the third round of the 2A playoffs while Northside (11-2) advanced to the fourth round in 1A after a win over the Seahawks.

In fact, Southside’s (11-2) only two losses were to their rivals.

Meanwhile, the Raiders struggled through a 2-7 season on the NCISAA 8-man level and changed coaches.

New faces will step in at key positions and the transition could take some time.

However, optimism and enthusiasm were on full display on the first day.

“Our numbers were good and the kids were excited,” Southside coach Jeff Carrow said. “We had around 50 out for the first day and we expect a couple more later this week. They gave great effort and hustled, so that makes for a good start.”

“We saw the same group of kids (around 50) Monday that we saw all summer and that’s a good thing,” Northside coach Keith Boyd said. “We can hold them a little bit accountable now that practice is mandatory, but it was business as usual. They were enthusiastic and got after it. It basically means that we are one day closer to our opener.”

All three public schools open on the road August 19. The Panthers are at Camden County, the Seahawks are at North Duplin and the Pam Pack is at Pamlico County, while PCA hosts Father Capodanno HS from Vass N.C. at 5 p.m.

Northside will host an eight-team scrimmage Wednesday, Aug. 10 that includes Washington and Southside.