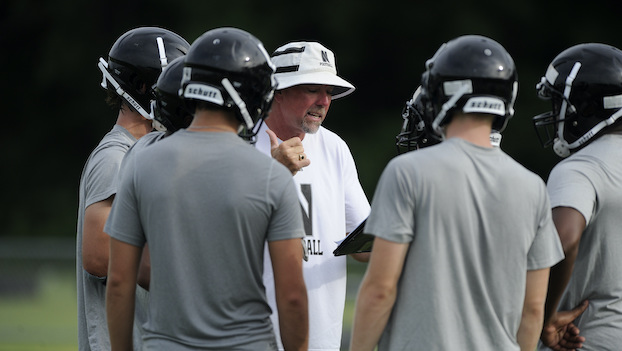 Beaufort County football teams will get to hit somebody besides their teammates during Wednesday’s jamboree at Northside.

Two teams will be on each end of the field with the offense starting at the 40 -yard line. After 10 plays, the teams switch from offense to defense and vice versa. If the offense scores or the defense forces a turnover before the 10th play, the offense keeps the ball starting over at the 40.

Washington will line up against South Lenoir, Gates County, Northside and Southside.

“It’s a rough draft without keeping score,” Pam Pack coach Perry Owens said. “it’s a way to hopefully get a good gate for Northside and for guys in new positions to get reps on the field against an unfamiliar opponent. It will be fun to play the other county teams and get started with actual competition.

“We had to do that last year because a couple teams dropped out at the last minute,” Seahawks coach Jeff Carrow said. “We’ve done this pre-season jamboree for a number of years and don’t play each other unless we have to. We like to save it for the conference season.”

Carrow said each opponent Wednesday will give his team a different look on defense, which helps when the regular season starts.

“One team might have four guys on the line, another might have five and a third might give us something different with the linebackers or secondary,” he said. “It’s always fun to play Washington and it helps us make adjustments against teams we don’t know.”

“Our guys look forward to this because they can tackle somebody in a different uniform,” coach Keith Boyd said. “It will be fun to have it on our field and it puts us one day closer to the regular season.”

All three county teams are coming off successful seasons as the Panthers went 11-2 and made it to the fourth round of the 1A playoffs. Southside was 11-2 with both losses to Northside and the Pam Pack went 10-3 into the third round of the 2A playoffs.

Admission to Wednesday’s jamboree is $5 and the concession stand will be open.