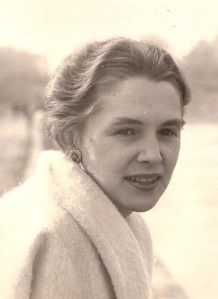 Alice Hubbard Stallings, age 90, a resident of Cypress Glen, formerly of Washington, NC, died at her home with her husband by her side.

Graveside services will be 10:00 AM Tuesday, August 9, 2022 at Oakdale Cemetery in Washington, NC.

Alice was born in Norfolk, VA, the youngest of three children. She was the daughter of the late Captain Leonard S. Hubbard and Ruth Russell Hubbard. She was raised in Seattle, Washington while her father was in the Coast and Geodetic Survey. Then, after moving to the Northeast, she graduated from Brookline High School in Brookline, Massachusetts. She attended Tufts University where she studied occupational therapy and met her husband, T. Franklin Stallings on a blind date on New Year’s Eve on December 31, 1953.

As her children got older, Alice continued her college education in art at East Carolina University. Alice was passionate about art, exploring many different aspects throughout her life. She exhibited in many shows culminating in a Retrospective at the Turnage in 2018 exhibiting her years of creating beauty with her art. Her art is displayed in local businesses and many residences throughout Beaufort County and beyond. In the 1970s, she was instrumental in bringing the ArtTrain to the Beaufort County Arts Council. She and her family lived in and restored the beautiful and historical Elmwood home in Washington from 1965 until 2015. Always wanting to be on the go and up for an adventure, she backpacked all over the Rocky Mountains, sailed throughout the Pamlico River, visited her sister in Paris, France, just to name a few of her adventures. Alice was a member of St. Peter’s Episcopal Church.

The family would like to thank Cypress Glen for their compassionate care provided over the last few months.

Paul Funeral Home & Crematory in Washington is honored to serve the Stallings family.