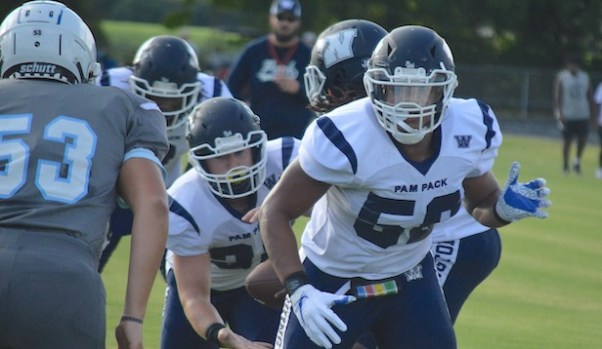 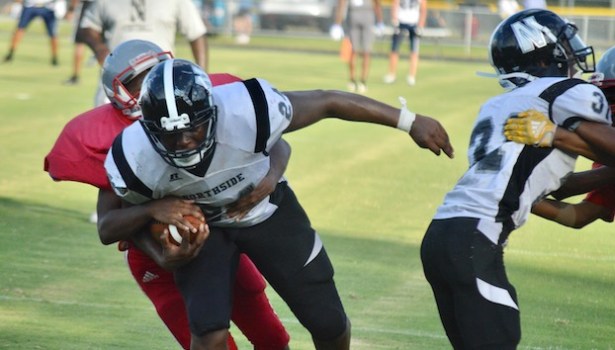 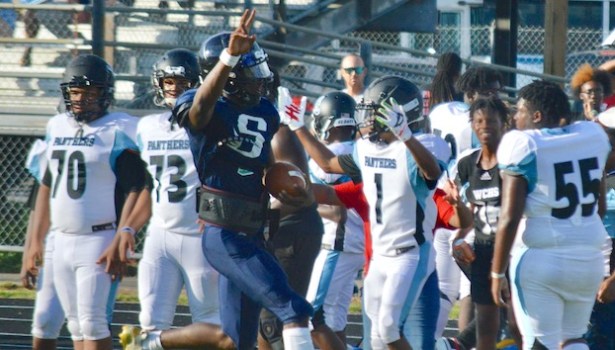 Pads popped, whistles blew and the crowd roared for the first time since late November as high school football returned to Beaufort County with a 10-team pre-season jamboree at Northside High School.

“I thought everything went really well from a game-day standpoint,” host coach Keith Boyd said. “All the teams arrived in plenty of time as did the officials, and our rotations on and off the field were smooth. It gives us good film to look at and puts us that much closer to Week 1. I thought our guys moved the ball well on offense and were stingy on defense. It gives the kids a taste of real football after working hard all summer. It was nice to hit somebody else for a change.”

There were four teams on the field at a given time, two working toward the endzone under the scoreboard and the others headed for the concession stand. Each offense started at the 40 yard line and ran 10 plays. If they scored or turned the ball over before the 10th play, they re-started at the 40. After 10 plays, the offense moved to defense against the same opponent.

Each team had 40 offensive and defensive plays for the evening, but no official score was kept.

“I thought our defensive line did well and our new linebackers settled in after the first couple of plays,” Southside’s Jeff Carrow said. “Our opponents (Washington Co., Bertie, Dixon and Washington High School) gave us plenty of different formations and we handled it well. Our conditioning was decent, we ran the ball hard and put up some points. There are always coachable mistakes to correct, but I thought it was good overall.”

The Pam Pack ended the night with consecutive sessions against the Panthers and Seahawks and those in attendance could tell the intensity rose to a different level.

“Most of these kids have played with or against each other for a long time,” coach Perry Owens said. “They see each other in the community and talk on-line all the time, so sure it was a little chippy at times. We showed that we are a talented team, but we need to control our emotions better. Chris Carter handled himself well for his first game at quarterback and made good decisions for the most part. We had good energy and played hard, so I’m happy with it.”

All three teams open the regular season on the road Aug. 19. Northside goes to Camden County; Southside is at North Duplin and Washington visits Pamlico County.