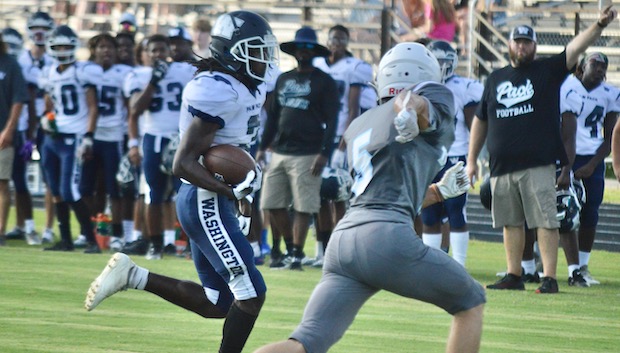 Junior Josh Gordon will play a featured role for the Pam Pack now that Terry Moore has moved on to Duke University. (Steve Barnes/Washington Daily News)

The Eastern Plains Conference coaches picked Washington High School to win the league for the third straight time in a recent vote.

The Pack finished ahead of West Craven by one vote after losing the conference crown to the Eagles last year.

“It’s always nice to be picked first because that shows respect for your program,” Owens said. “However, we’ve only actually won it on the field once, so there’s the part about meeting expectations. It’s a gift and a curse.”

The Pack defeated Kinston in a wild, overtime affair at the end of the 2020 season that COVID-19 delayed until the spring.

Last season, the only league loss was to West Craven, who went undefeated. The teams meet in the conference opener Sept. 24 in Vanceboro.

“The top five in our league are close in talent, depth and size” Owens said. “You could look at it like us and West Craven are the heavyweights, but if either one of us stumbles against somebody else, it won’t matter who won between us. It should be another fun year.”