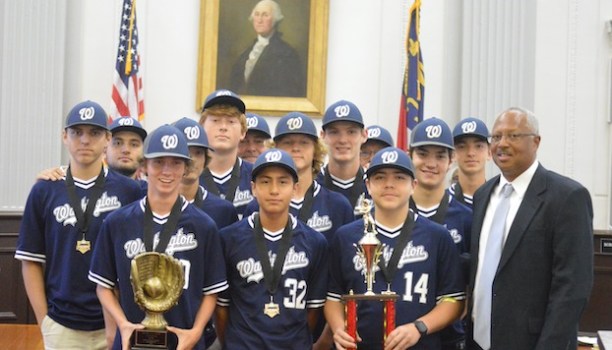 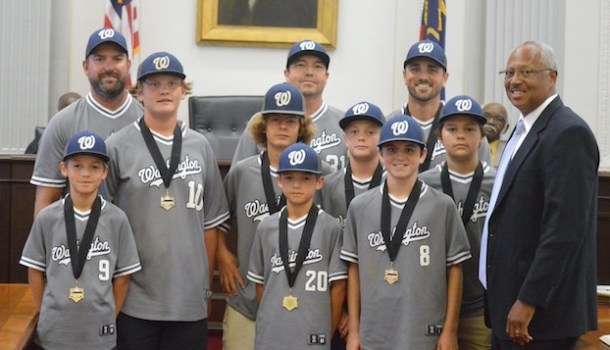 The Washington Youth Baseball League 15u and 12u All-Stars continue to reap the benefits of their performances in the state tournament in Boone last month as both squads were recognized at the Washington City Council’s August meeting. Mayor Donald Sadler and the rest of the council congratulated the teams on their performance.

Superlative would describe the 15u performance as they ran through the district and state tournaments undefeated to claim the first Tar Heel League state tournament title on any level.

“It’s a big deal to be recognized and our team thinks it’s pretty cool,” said spokesman Tanner Woolard. “It feels awesome to be part of the first team from Washington to win a state championship and we’ll remember it forever.”

Three new players joined the group that finished second in last year’s state tournament in Williamston and coach Scott Cutler said they came into this post-season with a chip on their shoulder and survived a trip to a bowling alley in Boone before the semi-final game.

“That might be the dumbest coaching decision I’ve ever made and I’ve been doing this a long time,” Cutler said laughing. “Our pitching was a little thin and I had these guys out there tossing 15 pound balls for a couple of hours. There was no carry over effect the next day and we played really well. Our guys were determined to win the whole thing this year and we went in with a purpose.”

The All-Stars won seven straight post-season games to claim the title and Cutler said hitting was the big reason.

“We batted over .400 as a team during the tournaments and had several home runs including a grand slam,” he explained. “We hit the ball to the opposite field when we needed too and went up the middle a lot. We showed good discipline at the bat, but were in attack mode all the time. I was very proud of how we executed our game plan.”

The 12-year old team lost in the championship game after battling back through the losers bracket.

“It was a great atmosphere in Boone and our guys took advantage to form great friendships (with each other). We played well on the field against good competition and had a lot of fun off the field.”

Both teams enjoyed the local attractions and made time to be tourists.

“I liked our team meal at the Daniel Boone Inn the best,” Layton Spivey said. “We had fried chicken and mashed potatoes.”

“Don’t forget the chocolate cake and banana pudding for dessert,” his twin brother Graham chimed in.