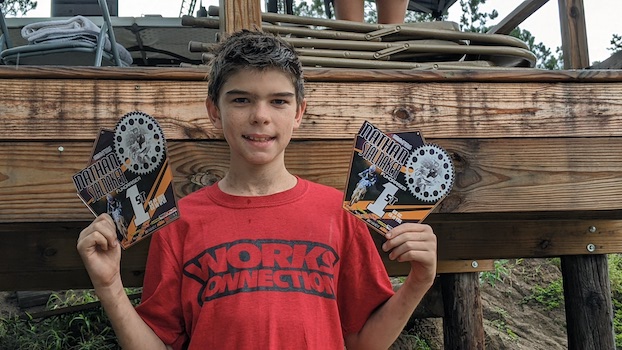 Trent Ashley holds his awards from the fundraiser for another local rider. (Submitted) 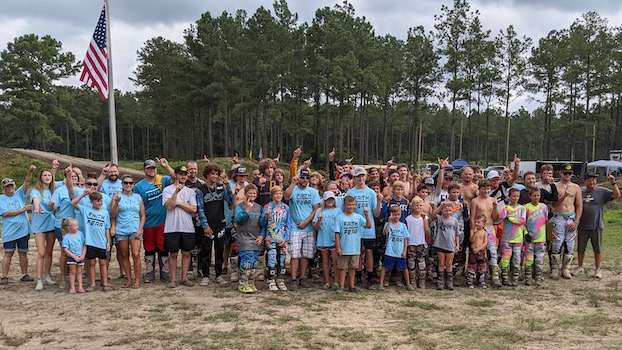 Motocross riders from around the area helped raise funds for Nathan Stainaker, who was injured during practice earlier this summer. (Submitted)

Beaufort County motocross racer Trent Ashley arrived at the Vanceboro track a couple of weeks ago looking to help a fellow competitor who was badly injured during a practice session. He left knowing he contributed and with two victories.

Ashley, 11, was part of a group who competed in a series of fund raiser races for 15-year old Nathan Stainaker of Craven County who sustained a

collapsed lung, broken nose, fractured nasal cavity, three broken ribs, a broken collarbone, a deep lung contusion and concussion during a practice session in early June. He is still recovering at Vidant Medical Center in Greenville, where he was airlifted after the accident.

“I’ve raced with his younger brother the last two or three years and I wanted to help any way I could, “Ashley said. “It’s a pretty close group of Motocross families in our area and I hope Nathan gets better as soon as he can.”

A GoFundMe account to help the family with medical costs has raised over $8,200 so far.

Ashley, a sixth-grader at Washington Montessori Public Charter School won the 65cc 7-11 age group and the 10-11 age group after spending most of the summer traveling to compete in Loretta Lynn National Amateur qualifying events. The series draws the top riders from around the country in each age group.

Ashley competed in regional events in the Florida and Pennsylvania and learned a lot despite not qualifying for the national race.

“I was doing really well in Florida until I wiped out just before the finish line,” he said. “I was mad then, but I’ve learned that every rider is good at that level and it takes dedication and focus to do well. Every track is a little different and I’ve been training almost every day in Vanceboro. It’s been a lot of fun so far and I’m going to stick with it.”