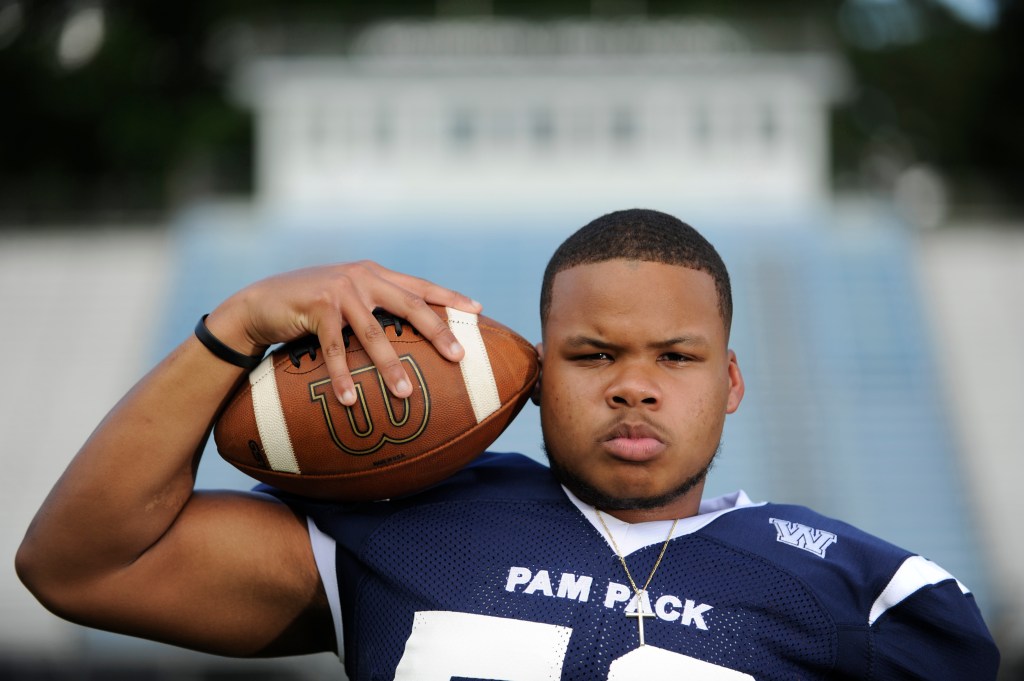 Washington High School senior center Myles Jackson has known since his freshman year that he wanted to play football in college. It was around that time that he also realized he would not be a college center.

The 6’3, 240 lb. Jackson enters his senior season with dual agendas that are both separate and the same.

On one hand, his main responsibility will be to read the defense correctly so the high-powered Pam Pack offense will continue to light up the scoreboard. The correct read leads to the correct play, which leads to over 40 points a game since Jackson has been snapping the ball.

On the other hand, Jackson will see time at outside linebacker and perhaps other positions so college coaches will have film to evaluate.

“Myles checks all the boxes for a high school linebacker and he’s a good enough athlete to help a college team at some position,” Owens said. “He knew this was coming and has worked very hard this off-season to be able to play a lot of snaps on both sides of the ball.”

Jackson’s parents, Myra and Charles, signed him up to play in the Washington Youth Football League when he was five and he played until he aged out, then went on to play at P.S. Jones, before arriving at WHS four years ago.

“I played a bunch of positions coming up and became a center by accident,” Jackson said. “My friend who was the starting JV center quit and coach (Kevin) Chapman told me I was the replacement. I said okay just to get on the field and it’s been a lot of fun.”

The fun included a trip to the Eastern finals his sophomore year and consecutive All-Eastern Plains Conference selections with a third in the offing. Consistent improvement, physically and mentally has been the key.

“Center is the most important spot on the offensive line and Myles ability to understand how the defense lines up is crucial to our success,” Owens said. “He signals us on the sideline and we send in the play based on his read. He hasn’t made a bad read since he’s been on varsity and that’s a big reason why Terry Moore and Hayes Pippin were so successful when they were here.”

With Pippin’s graduation and heir apparent Spencer Davenport’s out of county move, the Pack will be breaking in a new quarterback with little time to prepare.

Defensive back Chris Carter will replace Davenport under center and it’s Jackson’s job to make him comfortable quickly.

“It’s been good so far because we’ve played together for so long,” Jackson said. “He was my quarterback in rec ball one year and he trusts me. It’s my job to keep the huddle calm and focused, so he can worry about executing the play. He’s a great athlete, so it won’t take him long to make an impact. As long as us linemen take care of our business, we’ll be okay.”

Jackson carries a 3.5 GPA and lists Biology and American History among his favorite classes. He plans on majoring in Criminal Justice in college with an eye toward becoming a U.S. Marshall.

“I’ve always enjoyed hands-on physical activity and I think it would be really cool to be a U.S. Marshall,” Jackson said. “I was really into playing SWAT when I was little and this is an extension of that. It would also be a chance to travel the world.”

He’s heard from the coaches at Elizabeth City State, Randolph-Macon, Shaw, Saint Augustine’s and N.C. Central with a conversation or two with the ECU staff. He knows that showing his versatility this fall will be key.

“I’ve worked all summer in the weight-room and outside as well to show what I can do on defense,” Jackson said. “It will help the team to play there and I’m ready for it.”

He credits Chapman for teaching him the center position and former teammate Robert Pollock for helping him on the field, as well as Owens.

“My coaches here have been outstanding,” he said. “They understand us and put a lot of time into us. They’ll listen to us when we tell them what we see on the field and adjust if necessary. To me, the best part of football is when we all work together to produce a touchdown. Everybody doing their job to make the team successful is why I love the game.”

Owens thinks Jackson’s leadership, intelligence, toughness and high character will translate to the college level no matter the position.

“You don’t hear his name after we score, but it wouldn’t happen if he wasn’t driving the car,” Owens said. “Someday when he brings his kids back here, he can point to the trophies and banners and tell them “Pops ran the show here.”