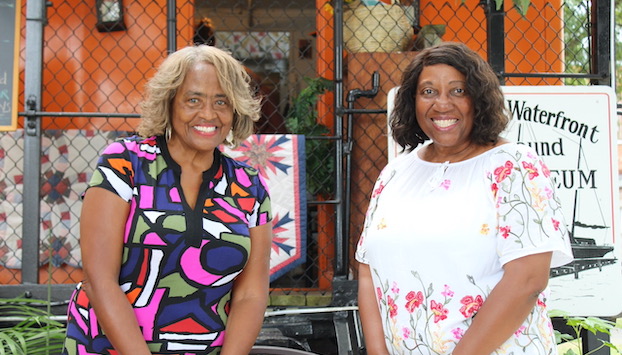 As the Southwest Regional Manager of the National Park Service’s Underground Railroad Network to Freedom Program, Sheri Jackson, spends a lot of her days on the road touring the over 600 member sites across the United States. Jackson recently made her first ever visit to Washington while touring some of the Network to Freedom sites in North Carolina, which includes the Washington Waterfront Underground Railroad Museum and the Washington waterfront.

“Washington is such a beautiful little town and is home to so many wonderful stories of freedom seekers,” said Jackson. “I wanted to be able to see the town first hand and to be able to meet with Leesa Jones, the Executive Director of the museum, to let her know how much we support and appreciate all of the work she has done here.”

“Sheri has been so helpful to us and an invaluable resource over the last several years,” said Jones. “It was very important for us to have her visit and to see all that we have collected over the years, which enabled Washington become a part of the Network to Freedom Program. It was such a delight to see and meet with her.”

Jackson says a lot of people know about the Underground Railroad but they don’t necessarily know what it is. That is why, she said, museums such as the Washington Waterfront Underground Railroad Museum are so important.  They allow people to come in and see all of the documents and records of that period in our history. And, to learn about enslavement, to learn about the ways in which people escaped, to learn about what that life was like, and to give people accurate accounts, so hopefully, they can walk away saying, “oh this is in the records.”

“It is all a part of American history, not just Black history,” said Jackson. “When you put all of this history together, you see that one thing affected another. All of these stories are interconnected, and you cannot tell one without the other. These are the stories of migration. People escaping and moving from one place to another through a vast, elaborate network across the country made up of families, people, organizations, the AME Zion Church, the Quakers, etc., all in search of freedom. As I tell people, we Black Africans know about running, we know about crossing rivers, we know about fighting, and we fought for our freedom.”

Jackson added that it is so important for people to know that even in this beautiful little town of Washington it was once filled with plantations and beautiful farms. And it was from these same places that the enslaved people escaped in search of their freedom.