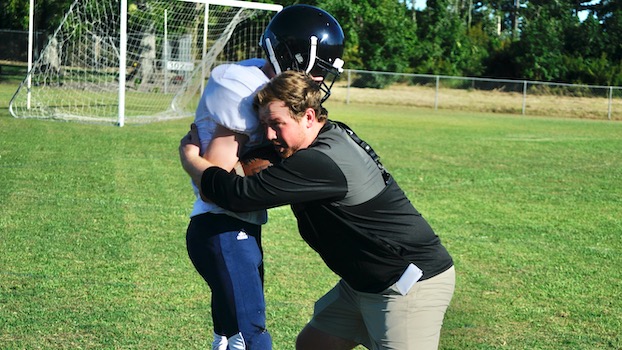 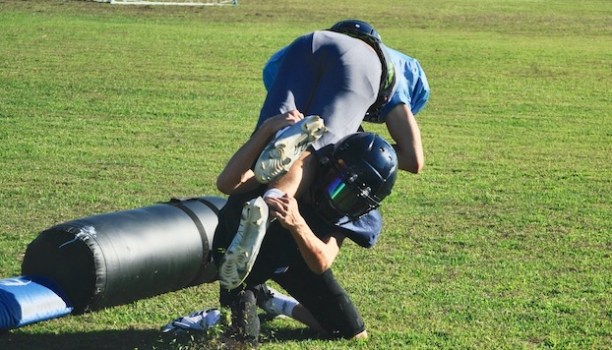 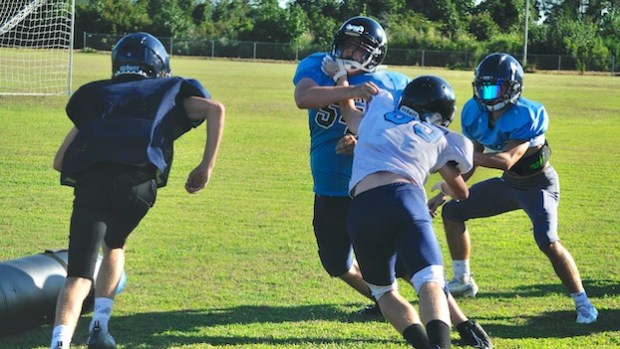 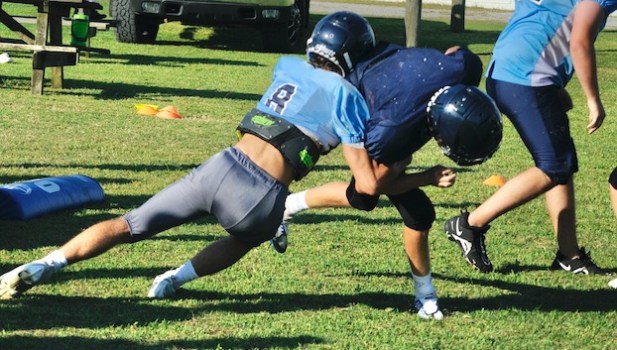 The Raiders look to imporve on both sides of the ball after struggling last fall. (Steve Barnes/Washington Daily News)

After a 2-7 season that included only one victory on the field, Pungo Christian Academy officials decided to change directions with the football program.

27-year old Alex Sefton took over in June, replacing Stacey Keech, who helped bring the football program back to the Belhaven school five years ago.

Sefton, a former linebacker-tight end at Hampden-Sydney College in Virginia, is an assistant District Attorney in Beaufort County, a job he took after graduating from Campbell Law School in 2019.

His coaching experience has been limited to youth leagues, while in high school in Clark County, Va., but he said his college experience will come in handy.

“This is my first time on the high school level, but it’s been great so far,” he said. “I enjoyed working with kids when I was younger and was looking to get back into football after law school. I had great coaches and learned great life lessons from football, so I’m excited to be in a position where I can point these guys in the right direction.”

The Raiders struggled with injuries last fall after a run to the NCISAA 8-man state championship game in the COVID-19 shortened 2020 campaign. They made the semi-finals the two previous years after returning to the field for the first time in nearly 30 years in 2018.

Pungo graduated six seniors off last year’s roster with all six playing key positions. Now it will be up to a group of youngsters to fill the roles of those now graduated.

“We only have two seniors, Conner Sweet and Ben Russell, and we will lean on them heavily,” Sefton said. “We want to play at a faster pace to take advantage of our skill positions and the guys are excited about that so far.”

Sweet started at halfback last year averaging over 11 yards per carry and scored seven touchdowns in just four games because of injury. Russell started at guard last year but will transition to center. Junior Ethan Mann takes over from his brother, Tristan, at quarterback.

With only 11 players on the varsity roster, virtually all will play offense and defense.

A new weight room for all sports to use has already helped the Raiders and Sefton says it will be key in getting the younger players into an off-season lifting program.

“It’s a positive step and will allow us to have a full off-season program for the first time,” he said. “Summer workouts will be more productive and with only two seniors, almost everybody in our program will benefit in the future.”

The Raiders season kicks off August 19th against Father Capodanno School from Vass, N.C in Belhaven. The road to the state playoffs will be tougher for the Raiders this season as the NCISAA elected to merge the two 8-Man divisions into one for the 2022 season. PCA (1A) will likely need to win their conference to qualify and would need to get through 3A powerhouses Arendell Parrott Academy or John Paul II Catholic to advance in the playoffs.

“Football season is the best time of year in my mind,” Sefton said. “I appreciate the opportunity PCA has given me and it’s a fresh start for all involved. We’ve put in a new playbook and are looking forward to good results on the field.”