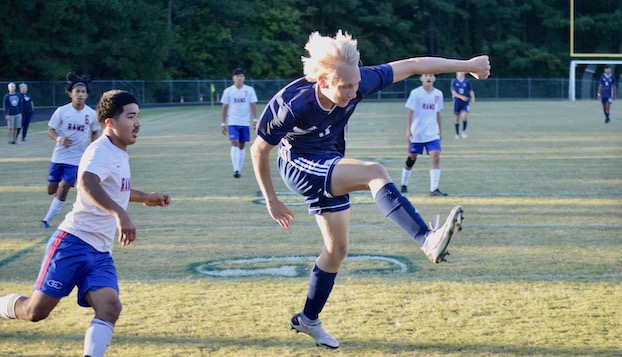 Jim Kozuch has seen a lot in his time as the Washington High School boys soccer coach. However, as he starts his 17th season on the pitch, he’s hoping to see something new in the next couple of weeks-a permanent home for the Pam Pack soccer teams.

The fundraising campaign for the new facility that borders the western edge of the school’s grounds started in 2018.

“I’m hoping we are playing on the field in three weeks,” Kozuch said. “The lights are up and the electricity will be on any day now. We have a new scoreboard and the posts are up for it, so that’s next to be installed. We’ve borrowed some small sets of bleachers from Kugler Field, so we are almost ready. The grass is almost there as well, so we are getting close.”

The team has held pre-season practices at Kugler Field and will play the first few home games at Wagner Stadium as in the past.

The Pack lost three seniors from last year’s team that finished 14-6-1 with a trip to the 2A state playoffs second round.

They didn’t win the Eastern Plains Conference title for the first time in several years as Greene Central rolled through the schedule undefeated and lost the state championship match on penalty kicks.

“It will be us and them again this year,” Kozuch said. “Their 50 goal scorer from last year is back, but I’m looking forward to playing them again. We played well against them here last year and it’s always fun to test yourself against good opponents.”

“Those guys are going to do a lot for us and we have some young guys who will also help us,” Kozuch said. “Will Glover played a lot on varsity as a freshman and Edgar Quevado is a strong finisher at striker. If we can figure out how to get the ball to him, he has a good chance of putting it in the back of the net.”

The Pack opened the season with a 3-0 loss at J.H. Rose in Greenville Tuesday, then knocked off New Bern, 4-1, in Thursday’s home opener. Glover, Brown, Apple and Ivan Machado scored.

“This is the first time we’ve beaten New Bern in my 17 years here,” Kozuch said. “We played great and I’m really proud of my guys.”

The season continues Monday at home against Havelock.