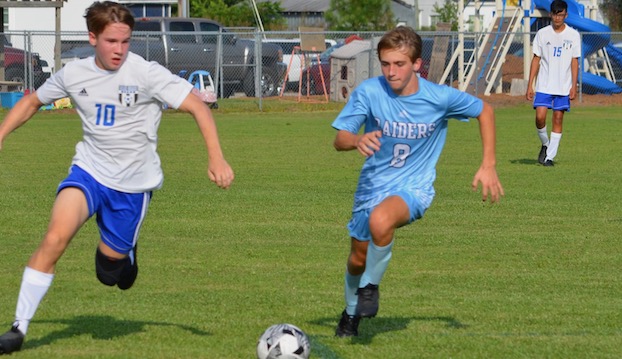 t was the first week back to school for Pungo Christian Academy students and with that came a multitude of sporting events. The Lady Raiders volleyball team started the week 4-0 after winning all their games in straight sets at Epiphany Schools Jamboree tournament. They defeated Columbia High School Monday 25 – 6, 25 – 13, 25 – 17, then hosted Northside in one of the most anticipated match ups on the Pungo schedule. PCA would take care of business again, beating the Panthers in 3 sets (25 – 21, 25 – 14, 25 – 20). Pungo traveled to Rocky Mount Academy on Thursday to face one of the top programs in NCISAA 2A. In warmups, Senior leader Reagan Stoop went down with an ankle injury and had to miss the match. The Eagles capitalized and sent the Raiders home with a 25 – 11, 25 – 15, 25 – 14 loss. The Lady Raiders have three matches this week against Christ Covenant, Faith Christian and John Paul II Catholic.

The soccer Raiders took the pitch for the first time this season, hosting two non-conference matches against Epiphany School and Christ Covenant. Maddox Lee started the scoring for the Raiders with a first half goal against Epiphany on Tuesday. The Falcons would answer with two more goals to make it a 2 – 1 deficit at the half. On came the rain in the second half and with it washed away the chances of a Raider victory with 8 second half goals from the Falcons handing the Raiders a 10 – 1 defeat. The Raiders bounced Thursday, defeating Christ Covenant School 3 – 2. Davis Lee opened the scoring one minute into the first half. He would go on to score two more goals for his first career hat trick and the Raiders first win. PCA will travel to Crossroads Christian and host Oakwood School next week.

The Raiders Cross Country teams traveled to Northside on Wednesday for their opening meet of the year. Luke Rouse and Ginny Pugh lead the boys and girls teams with top 10 finishes.

PCA kicked off its 2022 gridiron campaign by hosting Father Vincent Capodanno HS of Vass N.C. Friday. The Grunts scored on the first play with a 55 yard run but the Raiders would stop a 2 point conversion attempt. The Raiders Ethan Mann capped off a long scoring drive with a one yard touchdown run. Moments before, Senior tailback Conner Sweet left the game with an apparent forearm injury and did not return, leaving the Raiders with just nine healthy players. On the next Raider possession, Mann found Evan Woolard for a 21 yard touchdown strike. The Mann to Woolard combo worked again for a 2 point conversion, giving the Raiders a 14 – 6 halftime lead.

The lack of depth showed for the Raiders in the second half with multiple players dealing with cramps, including Mann, the starting quarterback. The Grunts had another long touchdown run to even the score at 14 going into the final quarter. The Raiders gas tank finally hit E in the 4th and Capodanno would put the game away with touchdown runs of one and 35 yards to beat the Raiders 28 – 14. Pungo will look to bounce back next week when the host Brunswick Academy Friday at 5:00 PM.