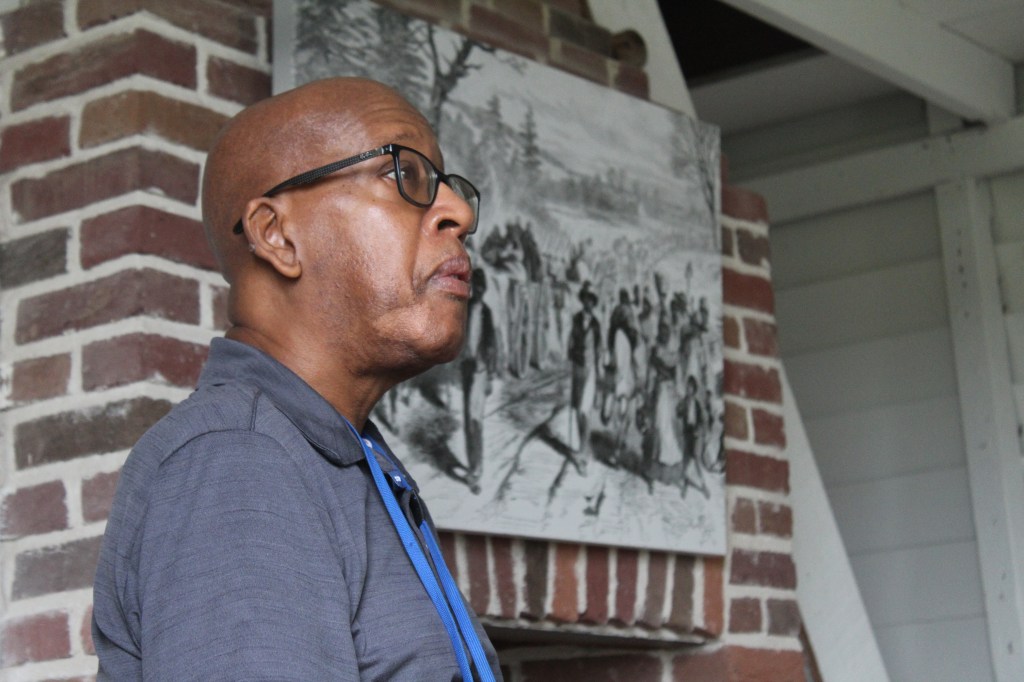 As one approaches a locked gate near the end of the runway at Coastal Carolina Regional Airport in New Bern, to the right stands a small white building. In the near distance, a stone monument. “This is a part of American History,” said William Hollowell Jr., chairman of the James City Historical Society in New Bern. “It is a true treasure to the community.”

As Hollowell explains, the historical society is the keeper of two very valuable pieces of history on the property. The small, white structure at the site is a circa-1850s slave quarters originally located on the  J.A. Meadows plantation in New Bern. After ten years and $200,000 in expenses, the James City Historical Society completely restored the structure back to how it would have looked from 1850-1870. Originally it served as slave quarters, but later became the home of those who had been freed.
The land on which it stands is a portion of what is called Far Cemetery, an area where enslaved and freed Blacks following the Emancipation Proclamation were buried.

“This whole area was a cemetery,” said Hollowell. “The ground on which we are standing is hallowed, and we revere it as such. The first time I walked through those gates I said to myself that I had to learn more about the story of the cemetery, the story of the quarters, the stories of the enslaved. I grew up in in Brooklyn and I didn’t learn that kind of stuff in school. I said I need to know more about myself, my ancestors, and my people. And here I am today.”

In 1941 the government decided to build a Marine Corps base there. During the excavation all of the grave markers were literally bulldozed away, loaded onto trucks, and buried elsewhere. The only known headstone that still remains is that of Caroline Perry. All of the others have been lost forever. A subsequent archeological study revealed there were 522 graves on the site, about half belonging to children under the age of 13. Of the hundreds who are buried there, there are no more than ten known names. The lone stone memorial was erected at the site in 2003 to honor the unknown dead.

“Every time I come out here I feel a strong presence that lifts me up and inspires me,” said Hollowell. “I love to talk about what is going on out here. I kind of, in a way feel a moral responsibility to tell their story, a story that everyone needs to hear. It’s not African American stories, it’s everybody’s story.”

The Far Cemetery got its name because it was the further, of two cemeteries, away from Old James City. The one closer was later demolished during the construction of highway 70. Hollowell said that when folks passed away in Old James City the community would walk in parade to the Far Cemetery to bury their dead. Upon their return they would hold a Mardi Gras type festival, a homecoming for the deceased.

“If you look at all of this and understand it, you know how much has been lost,” said Hollowell. “I feel a need to preserve what we can of this lost history to try and tell that story, and move that story forward with the generations that are coming up. When we were younger this was the furthest thing from our minds. Understanding and preserving your family history and where you came from. I feel this is a story worth telling. It’s worth my effort every day to learn all I can and share that knowledge.”

As Hollowell explained, during the Civil War Blacks were declared free if they could connect with Union troops in states that were in rebellion against the Union. When Union troops seized New Bern in March of 1862 up to 10,000 enslaved Blacks from all over North Carolina and beyond, made their escape to New Bern. They showed up with nothing more than the clothes on their backs.

“The challenge” said Hollowell, “was what to do with them. How to feed them, how to make sure they were secure. By March of 1865 there were nearly 3,000 formerly enslaved people living in the Trent River Settlement across from New Bern. The community was later named James City, which was named after Union Chaplain Horace James. There were 800 homes, a school, butcher shops, blacksmith shops, virtually everything needed to start a community”

Hollowell said there are so many people in James City and New Bern, who don’t even know about the museum. Hollowell says it gives him great pleasure to be able to share with them the stories they have never heard before and to see the expressions on their faces and eyes longing for more.

Hollowell recalled an interview he did with the Sun Journal back in March of 2022.
“In the story I asked the ancestors to send me someone who knows how to work with websites and media,” said Hollowell. “And low and behold the ancestors heard me,”with his arms raised high, “because I got a call from them two,” pointing across the small slave quarters room to Janet Savage and Sherman Boyce. “They said they wanted to help me. I was tore up, I was shook.”

Hollowell said there is strong evidence that there are additional bodies buried in the wooded area behind the slaves quarters. He said once the James City Historic Society secures additional grant funding they will begin the process of clearing the area in their search for more graves and hopefully grave markers that were left untouched.

For Hollowell it has been a great journey so far, and he says with a huge smile “it is going to be even a greater journey.”